It was the beginning of a new era and the continuation of an old rivalry...

99 for 99 takes a look at the 99 biggest moments in UB Football history during this season, the 99th season of UB Football. These moments are not in any order, however the top 10 moments have been saved for last.

Temple faced Buffalo in a game that would showcase the future of the MAC East. Temple would join the MAC in 2007, and were coached by Al Golden, a highly touted disciple of Joe Paterno. Buffalo was a long time MAC doormat but they finally showed signs that they were serious about competing in the conference. They were lead by Turner Gill, the highly touted disciple of Tom Osborne. Both coaches walked out of the tunnel at UB Stadium hoping to return 1-0 as a head coach.

The buzz at UB Stadium was the biggest felt since the 2004 opening game against Syracuse. Turner Gill shirts were handed out to students as they entered the stadium. The paid attendance was the highest ever, 29,795 fans paid for the game, setting a UB Stadium record that stands today. The consensus is only 20,000 fans showed up, but I contend that they were all UB fans, unlike 2 years earlier where the building was full, but contained pockets of Syracuse fans.

In today's era of College Football, a new coach brings a new brand. Turner Gill selected a modern twist on a classic. A modern monochromatic color scheme with a classic and simple UB on the helmets. Jerseys had no nameplates, it was going to be about the name on the front, not the name on the back. The logo was changed from a friendly cartoon Bull to a more angry, battle ready Bull. UBelieve was the mantra. 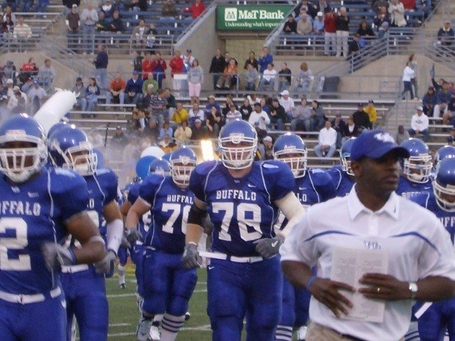 The pre-game atmosphere on the field was intense, both teams with nervous energy and an uncertain future. As the game started the new jerseys look great, the new logo on the field does as well. But the product on the field, definitely showed how far away both teams were from success. The teams traded three punts each before Buffalo finally drove down the field. Buffalo broke through to the red zone only to be denied by a Drew Willy fumble. Two more punts, and we reached halftime.

It was far from exciting, but unlike years previous, the fans did not leave at the half. They were ready to stick with Turner Gill to the end. That seemed to energize the Bulls who came out in the third quarter with more emotion. After a Temple punt, Willy found Terrance Breaux for a 50 yard pass down to the 8-yard line. After stalling at the 12, freshman Taylor Packwood had a chip shot to give Buffalo the lead, but he missed. 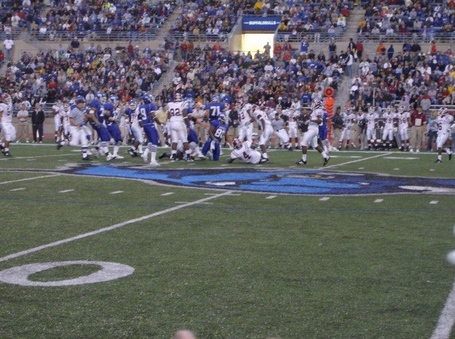 After two more punts, the Bulls shut down the Temple offense again and Jake Brownell set up for his 7th punt of the night. To this point, Temple had sent very short rugby style punts hoping for a good bounce and no return. This time, Turner adjusted, putting in local athlete Naaman Roosevelt to return the punt. Roosevelt got under the 29-yard punt, and returned it 17 yards, putting Buffalo in prime scoring position.

Another adjustment was replacing veteran running backs Steven King and Jared Patterson with another local athlete, James Starks. Starks ran 3 times for 15 yards and put Buffalo in position for a 32-yard field goal, another miss.

After yet another Temple punt, Starks ran 5 times for 45 yards and this time Packwood made the chip shot 27-yard field goal to give Buffalo a 3-0 lead. The defense needed one more stop, but they didn't have it in them.

Temple drove the length of the field and could mostly likely steal a win with a touchdown. Temple's Running Back took the ball at the 14, and found a gaping hole leading to the end zone, but an amazing effort by Jeff Bublavi, a hard working linebacker from Philadelphia, stopped the Temple back at the 2. The defense dug deep and held Temple to 3 points. The game went into overtime.

Buffalo won the toss and went on defense first. The defense seemed reenergized and forced a turnover when Jesse Imes picked of Adam DiMichele. UB only needed a field goal to win, but they had no confidence in their field goal kicker. The defense ran off the field in full celebration mode. "SHUT UP GAMES NOT OVER YET" was the yell from the Defensive Coordinator, who was never in celebration mode.

Three plays later, Buffalo had the ball: 1st and 15 at the 18. UB couldn't afford to stall in the red zone again. They gave the ball to Starks on a stretch to the right side; Starks hit the corner, out ran the defense and gave Buffalo the 9-3 win. The team spilled on the field and the crowd followed. It was the first opening day victory in 9 years. 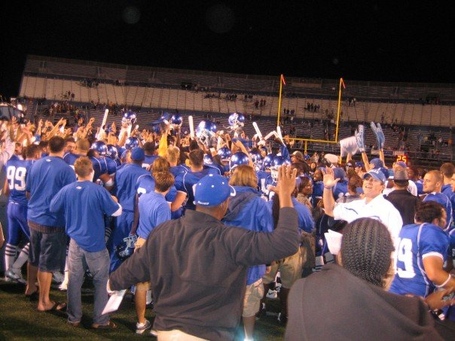 Looking back on paper, the Temple game was just one win, and not a particularly impressive one at that. 2006 was just a 2-win season. Did Turner Gill really bring anything special to the table? I say yes, he brought true belief. We believed in the Kicker, giving him 3 chances to make a field goal. The defense believed even with their backs to the wall. The offense believed they could convert after failing in the red zone for 60 minutes. Maybe more importantly, after blow out losses, losses to FCS teams and permanent stays in the bottom 10, the fanbase believed.