The UB Volleyball team put together a strong all-around performance against Navy tonight at Syracuse University, shaking off their serve-receive woes from their previous match, picking up their first win of the year, 25–18, 25–17, 25–21. Buffalo is now 1–9 on the year. This is the first win of coach Blair Brown Lipsitz's career. 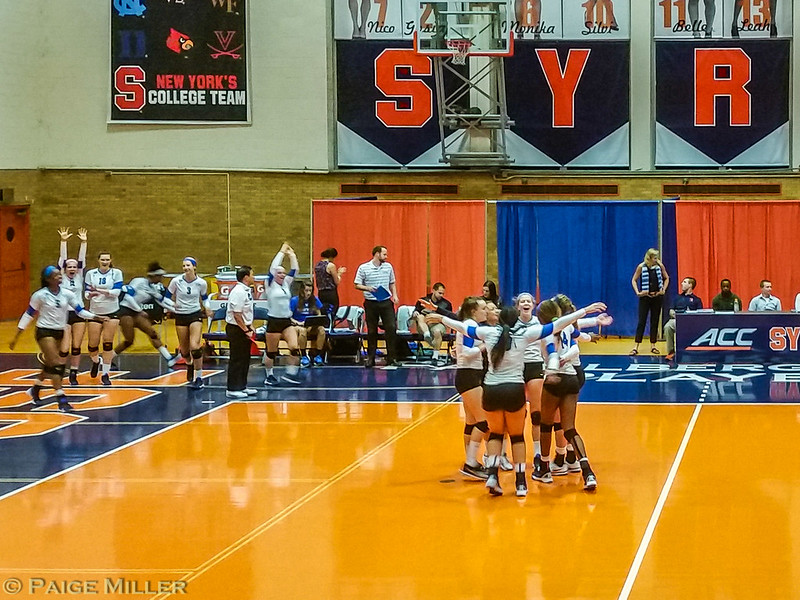 And as much as that puts a smile on any UB fan's face, there was one moment that resulted in an even bigger smile on my face. Junior setter Megan Lin made her first appearance of the year, played extremely well, and for the first time in her collegiate career, her father Jonathan was in attendance, flying in from Taiwan to spend a month in the United States.

Lin was placed into the lineup as a serving specialist, replacing freshman middle blocker Megan Wernette when Wernette rotated to the back row. Lin led the Bulls last year with 28 aces. So when Wernette didn't serve well in her first start a few days ago against Canisius, Buffalo coach Blair Brown Lipsitz went with Lin in that position tonight. And Lin's serving was very sharp, keeping Navy out of system all night long. With Lin serving, Buffalo outscored Navy 10–4.

In the Bulls' last match at Canisius, Buffalo struggled mightily with serve receive, and had 11 serve receive errors, six of them due to sophomore libero Tessa Ooyama. Against Navy, Buffalo had only 2 serve receive errors, one of them coming on a Navy serve which hit the net and barely made it over, which Buffalo could not even get their hands on. More importantly the passing from the back row of Ooyama, freshman defensive specialist Abby Beecher and sophomore defensive specialist Niki Bozinoski was on target all night long, leading to the Buffalo offense being in high gear all night long. Buffalo hit 0.318, which is well over .100 points higher than their previous high this year. Things were going so well that even on those few occasions when Buffalo made a bad pass, good things happened. One of the few bad serve returns all night was when Bozinoski passed the ball over the net to the Navy side, and they let it drop to the ground for a kill for Bozinoski. (Yes, I see it's not in the box score, but believe me it happened). Ooyama had a career high of five assists, most of them coming on sharp bump sets during scramble plays.

I would be remiss if I didn't mention senior setter Marissa Prinzbach here. I am probably starting to sound like a broken record, but when she gets good passes, she makes dead-nuts perfect sets. And so in the crucial third set, Buffalo fell behind 10–5, some of Buffalo's passing faltered, and Navy took the lead. The Middies got some energy from 5-7 outside hitter Gaby Smith, and put in their third setter of the night, and played better than they had all night long. But then Buffalo's passing improved, and suddenly it was Prinzbach with perfect cross-court sets to senior outside hitter Megan Lipski; and it was Prinzbach with perfect cross-court sets to freshman outside hitter Valisha Watkins; and it was Prinzbach with perfect backsets to Wernette on the slide. When Prinzbach let the ball go all the way across the court to Watkins or Lipski, nearly 30 feet away, you could almost feel it was going to be a kill long before the ball got there. And Lipski and Watkins sure got off perfect swings.

Wernette started for her second straight game, replacing injured senior Amber Hatchett. Wernette seemed much more comfortable and effective tonight. She picked up a career high 8 kills and hit 0.500, plus three blocks. On one play late in the third set, with Buffalo surging back into the lead, Wernette went up for the block, the Navy attacker tried a roll shot over Wernette's outstretched hand, but Wernette had enough height and presence of mind to contact the ball on her way down, send it back over the net, and Navy couldn't return it.

Lipski had her season high for a three set match with 16 kills (or season high with 5.3 kills per set), and also her season high in hitting at 0.343. Add in five digs and this was easily Lipski's best match of the year.