Share All sharing options for: 6 weeks to kickoff: Greg Lis

Redshirt Freshman (2014): Played in six games as a reserve linebacker and on special teams.

Outlook: Lis will likely reprise his role as depth LB and special teams coverage, he should be in position to compete as a starter next year as 4 Linebackers will graduate.

I sometimes get accused of being to harsh, so I'm going to compliment sandwich this recap.

After three seasons at 18-20, a five game losing streak sent UB nation plummeting back to earth. That said, a win vs 1-win EMU and a win at winless Akron would allow UB to save face at 4-8.

The immobile object lost to the acquiescent force 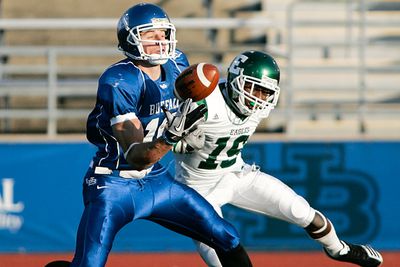 every week, save the first, has felt like a new low.

EMU took a 21-10 lead early in the first and UB responded with a Jerry Davis to Ed Young TD pass, to get within 4 yards. However, UB was never able to challenge again and the game ended 21-17.

Jerry Davis had a decent game, 20 for 32 passing for 222 yards and 2 TDs, plus 42 yards rushing and no turnovers. Alex Neutz was his main target with 7 receptions for 112 yards.

but since that loss, UB has been dedicated to protecting house, and is 15-9 at home.