Share All sharing options for: Who owns the jersey? #99

As UB transitioned to D-1A, Williams encapsulated the spirit of the lower divisions by playing both football and basketball for the Bulls. As a senior out of Edwin Denby High School in Detroit Williams played against the likes of Antonio Gates. Unlike Gates who starred as a basketball player in the MAC, Williams found his success on the gridiron.

Williams played 12 games over two seasons scoring 21 points, before deciding his future was in football. The decision was eased by his play in 2000, where #99 had a Khalil Mack-like season at linebacker (Mack was 9 when Williams had that season, just to make everyone feel old). 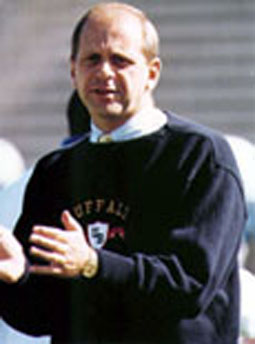 Williams added five sacks that season to lead the 2000 Bulls, the nine sack season total is the sixth best in UB history and his 15 tackles for loss stand tied for 10th best in single-season UB history. Williams also had three interceptions, tied with Mark Graham for the 2000 lead, and Williams led the Bulls 9 passes defended. Despite being 2nd in the MAC in sacks, and 24th in the nation, Williams was only an All-MAC honorable mention (because MAC postseason awards are and always have been the absolute worst).

Perhaps the first victim of Jim Hofher's poor talent usage, Williams was moved from outside linebacker to defensive end for the 2001 season. In his new position, Williams only managed a half sack, 9 tackles for a loss and 3 passes defended.