History of the Buffalo Bulls vs Army Black Knights

Share All sharing options for: History of the Buffalo Bulls vs Army Black Knights

In the winter of 1960 the Buffalo Bulls managed to arrange a game with the Army Black Knights. UB was coming off of back to back 8-1 seasons, a Lambert cup, and a Bowl invitation but they were still considered a small school, one that was rebuilding. 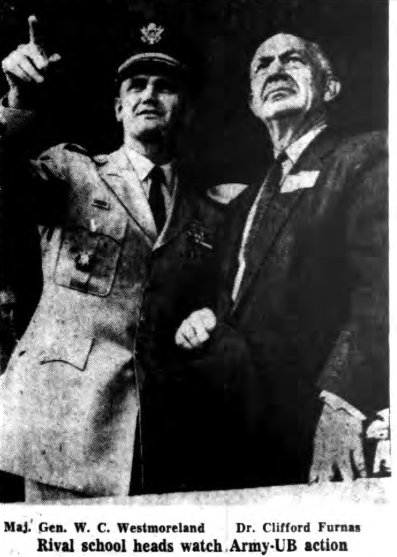 "We decided we would both be better off with a game", Offenhammer said of the talks. "Why Scrimmage for three hours and get all bumped and bruised when a game would accomplish more?" he said.

Army was still considered a football power and UB, at the time, was akin to an FCS team that was replacing a lot of key components to their recent success. The vision of UB chancellor Clifford Furnas, which started with the hiring of Offenhammer, had garnered UB a lot of respect but even good programs occasionally hit a rebuilding season. For UB that season 1960.

Buffalo went into the game as a heavy underdog and Offenhammer hoped to turn that to his advantage. The UB coach kept stressing in the media Army was the team with something to lose and he was going to go and try to show them a game.

But Army was not shaken and subjected the Bulls to a 37-0 shellacking which was keyed by UB turnovers and poor special teams.

UB's would suffer the programs worst loss in a half dozen years but the day started with the Bulls defense holding it's own.

Throughout the first quarter the Bulls defense flustered Army, keeping the Academy off the board.The offense also had modest success moving the ball helping to keep even in a field position battle.

Then, around the 13:30 mark of the first quarter, UB's special teams broke down and allowed the games first touchdown on a 74 yard punt return by Dick Eckert. That blow knocked UB completely off balance and allowed Army to pile on a 24-0 half time lead.

During the final 17 minutes of the first half UB ran a total of 10 offensive plays. Among the ten plays were four interceptions, a fumble, and four rushing for negative yards. Just one play for the Bulls netted a positive result.

Army ate up the turnovers and used the short field to score again and again.

In the third quarter Glenn Adams gave Army a 71 yard punt return. The Black Knights closed out their scoring with a 17 yard touchdown pass.

Other than special teams offense was the Bulls biggest problem. UB ended the day with 21 yards rushing and 57 passing, the vast majority of that happened in the first quarter. Despite some success in the first Quarter UB never got past the 50 yard line. Army racked up 397 yards, 263 on the ground but the defense had its moments.

During the fourth quarter UB held Army on a goal line stand only to have the offense fumble the ball back away two plays later. Once again the defense stiffened and held Army out of the endzone. It was a small victory in a game full of big defeats for UB.

The team went on to finish 4-6, their first losing record since Friedrich "Fritz" Febel coached the team in 1954. It would take Offenhammer one more season to get UB back to winning. By 1962 the team was 6-2. UB would not play Army again until 2001. Since UB's reentry to Division One they are 2-0 against Army, winning that game in 2001 and facing off again in 2008, when the game was won by UB in overtime.