Down the three contest left until we crown a champion. Tough matchups and I have no idea who makes it into the championship. Voting ended for this contest 5/27 at midnight

Voting for this contest ended 5/27 at midnight.  Bocce Club moves into the final.

Buffalo and WNY has some amazing places to eat.  At Bull Run you will decide the best place!  Thirty two teams entered and now only four remain.  In the Eat More Final Four are Bocce Club Pizza vs. Ciavetta's and Lloyd vs. Ted's.

Only three more times you will be able to vote until you crown the UB Bull Run MunchMadness Champion.  Some interesting voting the past round so this is anyone's still to win!

I would also like to take this opportunity to thank all who have or currently serving in the military. Happy Memorial Day. 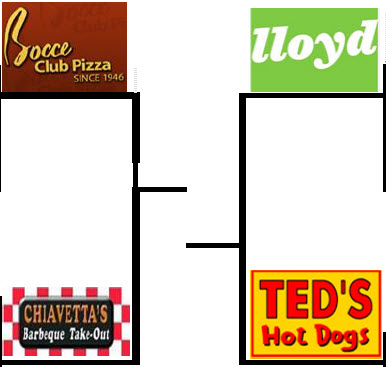 Up first is Bocce Club Pizza vs. Chiavetta's Barbeque

You can view all previous match-ups here Munch Madness Stream. Bocce Club has taken down a who's who of eateries in Buffalo.  A first round victory over Anchor Bar, second round upset of Brennan's Bowery Bar, and last round knocked off Charlie the Butcher.

Chiavetta's had no easy route as well to the Eat More Four taking down WNY's favorite Chinese/Vietnamese restaurant Red Pepper, than took out Duff's, and in the last round took out Gadawski's.

When I think of Bocce Club Pizza, I think of the location that is on Bailey Avenue.  While attending UB, growing up on Grand Island, and the fraternity house on Bailey and LaSalle, always in awe every time I would drive by with the activity and cars pulling in and out.  They say that imitation is the sincerest form of flattery and now seems like on every corner (Niagara Falls Blvd. & Sheridan & Eggert & Bailey) in Amherst is a pizza restaurant.  Bocce was the original and has more than stayed up with the times.  Frequent upgrades to building, strong social media presence, and even dabbled with a phone app.  Link for App 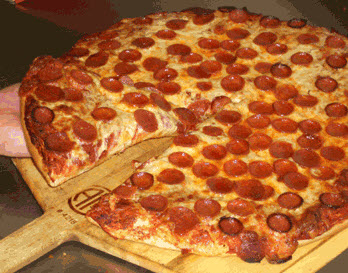 Every year I go on a golf trip with friends from Atlanta, Austin, and Charlotte.  My friend from Atlanta was the host and rented a house on Lake Oconee in Georgia.  The cool thing is his brother in law is a ex pro golfer who is currently a host on Golf Channel and always hooks us up some how.  Half the fun of the trip is cooking and cocktails (and then more cocktails).  Steve is an amazing cook and was the first person I knew who perfected cooking in the Big Green Egg. His salmon that he grilled was the best I every had but I digress.  This man can grill.  A three day trip and we cook two nights and rush to airport the final day.  Steve cooked the first night and killed it.  As he does every year. The next night I was the one responsible for dinner.  I had a trick up my sleeve and hidden in my golf bag.  A 64 Oz. jug of Chiavetta's Marinade.  Before we headed out to the course, I had fresh chicken in a large bowl in the fridge swimming in the marinade .   Fired up the charcoal and could see Steve constantly looking over inquisitively the whole time I was getting dinner ready.  After Steve's first bite, Steve states "Man can you grill."  Thank you to Chiavetta's for helping me impress my southern grilling experts! 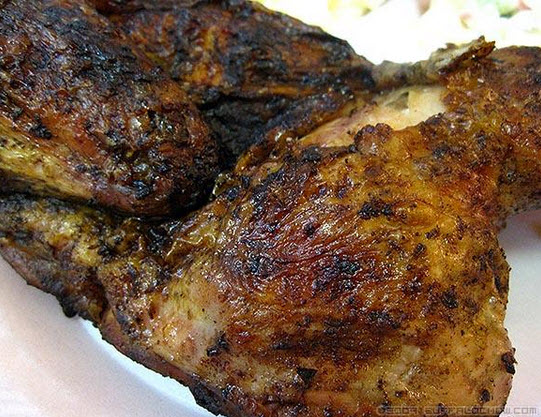