Two restaurants with a great turnout in the first round. Who is going to move into the elite 8?

Share All sharing options for: MunchMadness - Dick & Jenny's vs. Chef's

Buffalo and WNY has some amazing places to eat.  At Bull Run you will decide the best place!  Participants in the second round includ this match-up of Dick & Jenny's vs. Chef's and the last of the Sweet 16 - Ted's vs. Buffalo Chop House.   Second round victors so far are Bocce Club, Charlie the Butcher, Chiavetta's, Gadawski's, Lloyd, and congratulations to Grover's. 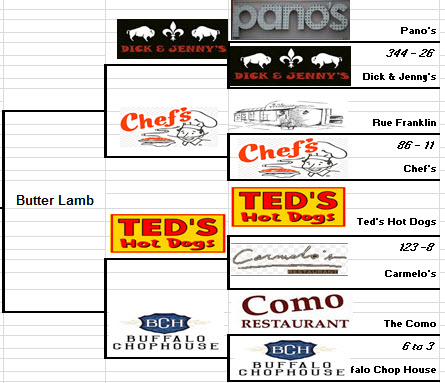 Dick & Jenny's has a very passionate and loyal fan base who came out strong and took 93% of the votes over well know Buffalo institution who "does it well" Pano's.  Dick & Jenny's had the largest fan turnout of the first round by over 100 votes!  Can the fans propel D & J into the next round?

Chef's took on Rue Franklin in the first round.  Chef's took 83% of the vote and Chef's  fans need to step up to hopefully beat Dick & Jenny's.

I am lucky to live on Grand Island and have such great restaurants.  Saturday night my little man Dimitri and I went to play at the playground at Kaegebein School.  The playground is older and a committee is looking for donations, volunteers, and fund raising ideas to help raise the funds for a new playground.  If you can help, a Facebook page has been set up to contact Playground Facebook.  Any help or donation will be greatly appreciated.  OK enough with the blatant plug. As the sun was going down and we were leaving the playground I wanted to start Mother's Day Saturday night.  Three words popped into my mind.  Sticky Toffee Pudding from Dick & Jenny's.  My wife loves this dessert and Dimitri and I swung by to pick up.  Nothing cuter than a two year old delivering a little surprise to his Mommy.  The restaurant had a great crowd and smiles everywhere.  If you have not been to Dick & Jenny's, GO! I recommend going on night with live music but make sure you get reservations.

Can you think of another Buffalo institution like Chef's in Buffalo.  It is amazing how busy Chef's always is.  It is funny to see the shifts during the hockey season.  The ticket holders eating and then scrambling out around 6:30 to see the puck drop and then the "eaters" coming in after the hockey loons depart.  I saw in the video in  a Jimmy Fallon parody below pizza boxes.  I looked at the menu page and did not see pizza.  Clicked on the main page and see that Chef's is adding pizza, Chef's Garage Pizza.  I will have to try that.