Both the mens and womens tournaments are underway and UB is hoping to crash the party.

Both UB tennis teams are taking part in the Conference tournament today, each team starts their respective matches at 2pm (men Central women Eastern). The Men are three seed in Dekalb and will start with Western Michigan while the Women are the six seed in Muncie and will tee up against Akron.

The Men had a rough finish to the the season getting tripped up last weekend in 4-3 matches to Ball State and Northern Illinois but their 3-0 start give some hope that UB can do damages this weekend. Among their 3 wins was the squads first ever win at Kalamazoo and fittingly they will being their quest for the title against the second seed Western Michigan Broncos. This will be something of a grudge match for both squads. UB did beat WMU at home this season but the Broncos have twice in the past three years beaten UB in the MAC Championship match.

UB has been a very streaky team with a solid top of the lineup. If they can recover from last weekend there is no reason to think that they can not make a run. 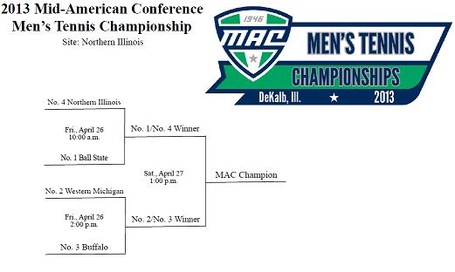 The Women tore through the non conference part of their schedule, and were at one points 10-0 after winning their conference opener. Then they got bit by the injury bug and proceeded to drop their next three Matches. They would recover a bit and finish the season on a 3-1 run to sneak their way into the tournament. Their on loss during that run was a 6-1 drubbing which came at the hands of Akron, the team they will face in the opening round.

The question for the Women is how healthy are they? If Tanvi Shah is 100% the Bulls should be able to match up with anyone in the Conference but if they have to move around players to accommodate for a nagging injury it's ahrd to see Buffalo going very far. 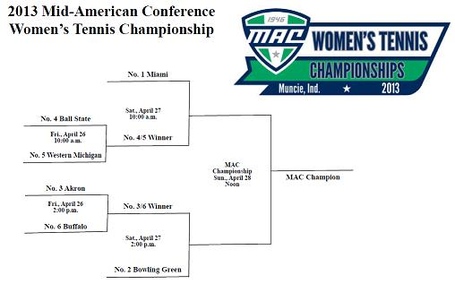 While I have your attention - Bull Run is more fan community than proper news site (as my lack of proof reading demonstrates). If a sport gets covered here it is because someone has the time and desire to cover it. So far that means Football, Hoops, Hockey (ACHA), and Baseball.

In other words we can only cover the sports that a site editor or fan writer follow and understand. The premise behind SBNation is that fan passion shines through.

So if you like Tennis and want to take a crack at covering UB Tennis for Bull Run I would be more than happy to set you up to do so.