While winning only 5 games in 2 years, including 2 victories over FCS teams, the Buffalo Bulls have returned to the bottom of the college football world. However, in 2011 the 2nd year of the Quinn era showed signs of promise via amazing performances by Chazz Anderson and Branden Oliver.

Branden Oliver ran for 100 yards and two touchdowns to help UB earn a 24-14 lead over Ohio. However when LaVon Brazill broke a big 67 yard run to give Ohio 17 straight points and a 7 point lead, all seemed lost. Jeffvon Gill looked to spark a comeback but he was cut down on his kick return at the 20, and Buffalo was flagged for holding. Buffalo would have to go 90 yards to tie the game up, and it just didn't seem like the team was up for the arduous task. Then Chazz Anderson hit Ed Young on a quick screen pass, Young took off and sped down the sidelines for a 90 yard touchdown. 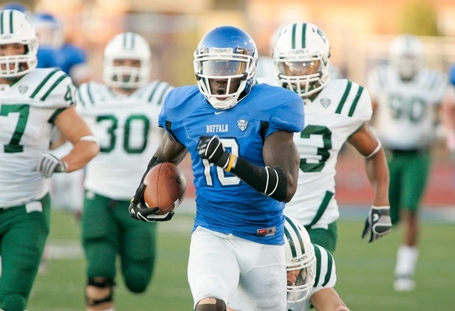 The touchdown pass is the second longest touchdown pass in UB history, behind only Mark Taylor's pass to Jamie Gasparre for 91 yards in 1996. The play also forced Ohio to respect the passing game. Down 34-31, UB ran the ball 11 times on a 18 play 78 yard touchdown drive that killed eight and a half minutes off the clock and gave Buffalo the lead for good. 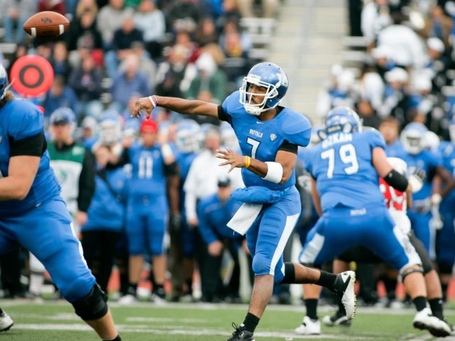 Chazz Anderson had not made the impact Bulls fans expected in 2011. After 7 games, the Bulls were 2-5 and Chazz was only averaging 187 yards passing per game. However early in the NIU game, Chazz threw the ball well, and outperformed heralded QB Chandler Harnish. At the half Anderson had 211 yards passing and UB trailed by only 7.

At the start of the 4th, Chazz and the Bulls came down to earth, Chazz threw for only 54 yards in the 3rd quarter and the Bulls were down 31-10. Instead of giving up, UB staged a terrific comeback that showcased the leadership and ability of Chazz. Anderson threw for 136 yards and 2 touchdowns. The 401 yards passed Zach Maynard's 400 yard game in 2009 and become the most passing yards by a UB QB in FBS, (7th all-time). His next completion was a 3 yard td stike to Ed Young to seemingly complete the comeback, but UB missed the game tying extra point and fell 31-30. For his performance, Anderson was named MAC East Division Offensive Player of the week.

In 2010, Akron was the worst team in college football, until they beat Buffalo. A losing streak to Akron would not be good especially with the second win coming at home. Fortunately, Branden Oliver put the team on his back and ran for 235 yards on 29 carries and Buffalo cruised to a 51-10 victory.

Buffalo was up 37-3 with 5 mintues to go in the 3rd quarter. Oliver already racked up a solid day, 22 carries for 163 yards. Oliver broke free for a 58-yard run to go over the 200 yard mark and just 10 yards behind James Starks' UB record yards in FBS. Oliver broke the record on the next drive with a 10 yard run and sat the 4th quarter out. Oliver finished with 235 yards, second only to Alan Bell's 266 yards in 1991. Jeffvon Gill took over in the 4thand ran for 46 yards, so it seems Oliver could have easily broken the record if he had played the whole game. Nonetheless it remains one of the greatest rushing performances in UB history. 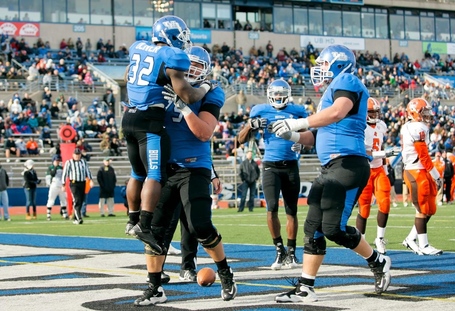 In the final game of the season, Branden Oliver had the chance to overtake James Starks' record for rushing yards in a season. BO only needed two quarters to break the record. Oliver ran for 127 yards and finished with 1760 yards, sixty-six more than Starks best. Oliver added 92 yards receiving and in the process broke Starks all-purpose yard record with 1,760 yards. BO became only the second athlete, (Starks was the first) to have a top 10 all-purpose yard season with 0 yards in the return game. Finally, Oliver broke a UB record with eight 100-yard games in 2011.