Share All sharing options for: Buffalo at Pittsburgh 3rd Quarter

When we last left you, Pittsburgh's offense sputtered, UB's lost playbook was not found, so Quinn continually called Slant and Delayed handoff...Jeffvon "Chevron" Gill was sent to find the playbook and was thus unavailable to spell Oliver. Ed Young dropped a touchdown, but spent halftime preparing himself mentally for his next opportunity.

If you need to catch up, check out the first quarter and second quarter recaps. 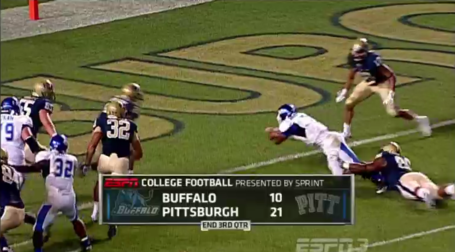 11:20 Foreshadowing alert: Oliver fumbles, but it luckily falls out of bounds before Pitt can recover.

That was the WORST screen ever!!

omfg throw that away chazz

Someone needs to send Jeff Quinn to Screeners Anonymous..

UB has had awful results from just about every screen they have run since Gill left..

What down was that interception on?

I was up getting more water

NEVER get up during a UB drive again!

10:01 Khalil Mack sheds his block then attempts an arm tackle...attempts the key word as the back shrugs Mack off and walks into the end zone. Pitt 14 - UB 3.

9:15 Chazz rollout left complete to Terrell for a first down.

4:50, Oliver had a TD in sight, but was running too high let the arm tackler get him down...lower the pad level young man.

real nice drive, and when I say real nice, i really mean

2:35, great read on the quick WR screen by Najja Johnson loss of 3.

2:09, disgusting play...Our line's pressure is 2 seconds too late again.. Shanahan still not covered...a tight end gets away from 3 bulls in open field. 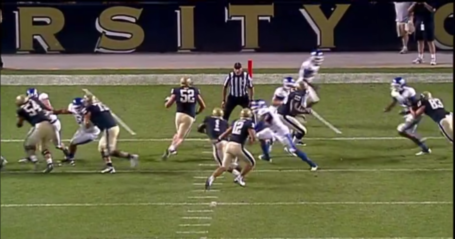 well that was easy

1:46 Jackson with a 25 yard return to the 36 probably our best field position of the night.

We have dominated for a bit, but an interception and a bad defensive series has us down 11. Will the defense rise up to the level of the offense? will the offense finish this drive with 7, or sputter out? Will there be a heart-crushing, game-killing drop by Ed Young? Check back for the conclusion of Buffalo at Pittsburgh 2011 recap.