Share All sharing options for: Buffalo at Pittsburgh 1st Quarter

To get myself ready for 2012, I decided I would look back on the games I could watch on ESPN so I took a look at game 1, Buffalo at Pittsburgh. 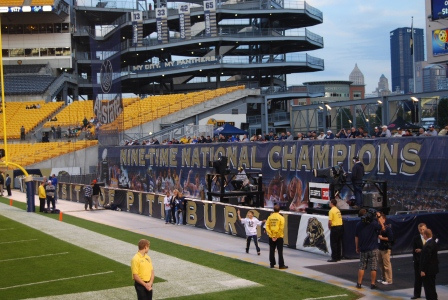 1st Nine claimed championships but it's probably actually only 5.

2nd Their last championship was 1976...the banner has a picture of the AFCA National Championship Trophy, aka the crystal football, which wasn't awarded until 1986. They never won the crystal ball trophy, their trophies look like this:

Anyway on to the game.

The last minutes of the offseason are great, hope springs eternal, no one wants anyone fired. The sun is shinning, UB nation is in a loving mood, 2010bulls sets the mood:

Is their anything better than beer and college football. Beers are cold, grilling with the outdoor TV flipping around games, and nice weather. One hour to kick off!

Temperature, 92 degrees, 100 on the field...I assume there was some humidity there, I forget how hot summer is, might not enjoy 100 degrees and 100% humidity in Georgia this September.

ESPN Keys to the game

Buffalo won the toss, elected to defer, because of our excellent defense and kick coverage no doubt.

Announcer on Todd Graham "I think this whole city is embracing him" - First and last time those words were ever uttered in Pittsburgh.

Pitt goes 3 and out

Buffalo counters with strong runs from Oliver, so we naturally go with a reverse for a loss, #Quinnball

Quinnball (n): Playing into your opponents hands by avoiding strengths with the intention of catching the opponent off balance.

Mike Shanahan eating us alive, surprisingly not the son of the Redskins coach.

The TD was a delayed handoff out of the shotgun from the 5, running back went in untouched...what are we missing?

That can't be good.

Pitt kickoff out of bounds, can we take advantage of the short field?

3rd and 9, delay handoff to Oliver for 1, not popular with CTBullsfan or 2010bulls:

ugh another season of third And long and we try

The delayed hand off.

Yes but they were EXPECTING us to throw.... see sneaky :(

Awful tackle attempt by Issac Baugh, he attacked too high, with his arms and not his body...the runner escaped for 8 more yards, and Baugh got a personal foul for a horse collar. 23 yards gained because the secondary didn't want to get physical.

1st down, Pitt disguises their blitz, but only send 5, Chazz sacked, left guard misread the defense.

3rd down Pitt goes heavy blitz we throw WR screen on the side away from the blitz, you always throw at the blitz...(cause there are less defenders on that side)...if we recognize the blitz and reverse the play it's probably a touchdown.

UB comes with a Corner blitz looked like he had Sunseri dead to rights, but the Pitt running back recovered to make the block at the last second. Sunseri overthrows a wide open receiver which would have been an easy TD.

13 minutes into the game, we get the first appearance of my 2nd favorite play, Chazz Rollout left good for 4 yards. (Favorite play is Chazz Rollout Right works 0% of the time, everytime, and always run on 3rd or 4th down.)

3rd and 4 another run, another punt, more bad punt coverage Pitt starts another drive inside the UB 40.

Sieve's have smaller holes than our D 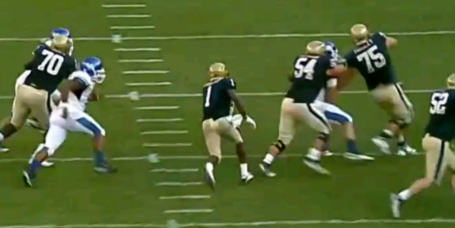 15 minutes into 2011, the Offense shows no sign of life. The special teams is very bad. The defense, can't tell if strong, or if Todd Graham is a horrible coach. The game is quite boring, and you get the feeling that UB will slowly bleed out into a familiar 42-3 loss, we've seen over and over in the past few years.