Share All sharing options for: Buffalo at Pittsburgh 2nd Quarter 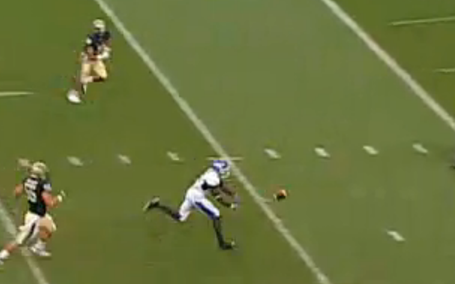 When we last left you, Pittsburgh running backs roamed freely through our defense, but due to the Genius of Todd Graham, they spent more time throwing incomplete passes...meanwhile Brandon Oliver found slightly more running room than Chevron Jeffvon Gill who was permanently fixated on the bench...down only 7, Quinn decides not to deviate from the original gameplan.

Pittsburgh in the red zone, they start to abandon the run and prove how high octane they are.

12:58 Finally we see Chazz Rollout Right....on 2nd down, with the usual outcome of ball thrown out of bounds.

terrible footwork there by Chazz

good feeling for the pocket though

Good punt out of bounds.... directional punting is a lost art.

Sunseri gets a 15 yard scramble, but Pitt got away with a monster hold.

Pitt matriculates down the field using the big targets:

somebody may want to cover the tight end

8:42 a coverage throw away, we are getting near to no penetration, probably should have been called intentional grounding.

8:32 of course as I say that, on 3rd down mack gets a nice pass rush on a stunt, Pitt checks down for a short gain and now a fg attempt....no good...Pitt is looking like a MAC team....

But the natives are getting restless:

I don't understand the fixation on Oliver

He's not starks. stop making him the focus on the offense

Two years in a row I don't get it!

why does nobody realize that Jeffvon Gill tends to lead the team in yards per attempt every year?

Maybe one day we'll find out why Gill was shut out and shipped out, but that Oliver guy found his grove eventually.

7:40 1st down good pocket good throw for a first down.

6:44, 2nd down quick slant to Neutz out of the shotgun

6:22 Quick WR screen to Terrell, 2nd first down...ahh the beauty of the spread offense, who cares which running back we use, lets just go 5 wide and toss it around.

6:01 another quick slant to Neutz another 1st down.

oh God no why

Are you kidding me

After the game I went back to the tape of the Young drop: 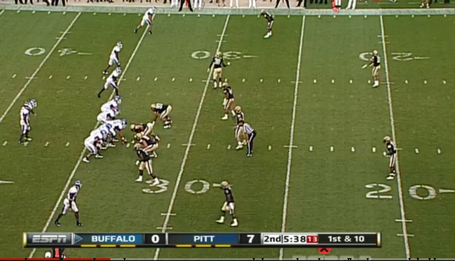 Pitt
Base 3-4 Defense, 1 OLB standing up at the line of scrimmage, 1 OLB and 1 MLB split covering WR's, 1 MLB at Center. 2 deep safeties and 2 Cornerbacks on the outside. 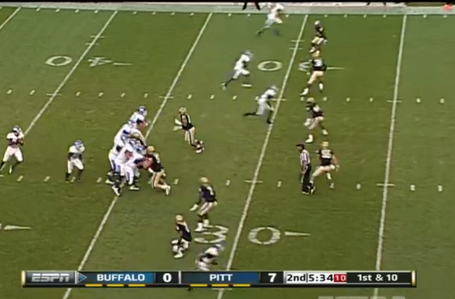 Pitt expecting a short pass, sends all 4 linebackers and both corners on shallow zone drops...2 deep cover 3 it looks like...on the bottom of the screen you can see Marcus Rivers has a free streak down the field...an inexperienced QB would be tempted to go there... 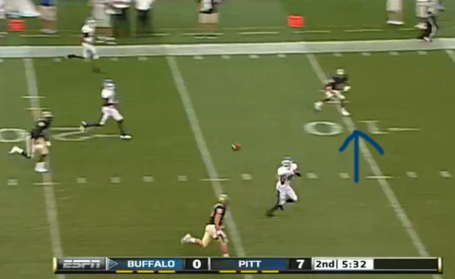 But an experienced QB knows the easier play, and safer (see Donald Jones) is waiting for the safety to shift outside and hitting the slot receiver.

Perfect execution prevents teams from cheating, and getting away with it. It stops teams from playing zone, and blitzing, and allows you to exploit your one on one matchups.

Poor execution, penalties and mental errors, are the surest way to steal defeat from the jaws of victory. 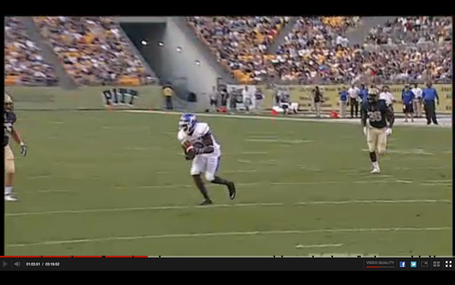 On reverse angle, I can't see why that ball is not caught. Like Ragu it's in there! 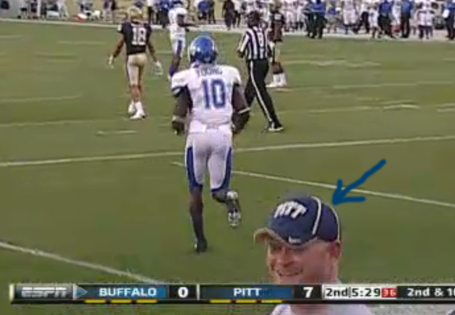 Insult to Injury...the Pitt Manager turns back to laugh with his friends about how much we suck.

Back to the game:

So with regular plays working, but not being executed properly, we try to execute some trickeration, with a FleaFlicker, Rivers gets his hands on it couldn't bring it in.

the last two have been real close

3:59, huge jailbreak pressure, blantant holding and a dropped INT by Lester...and yes no call on the holding. True Blue is feeling the defensive effort.

anybody else hear the chant?

Love that moment sometime in the 1st half when we do something good and can chant before losing...in Tennessee there was the Chazz touchdown run and the recovered fumble on the ensuing kickoff...the euphoria lasted about 40 seconds tho as we went 3 and out and missed a field goal.

BTW Jeff Quinn *still* has not scored a First Quarter Touchdown as a HC...

3:45 the alway effective return for 0 yards with the block in the back penalty.

Chazz roll right not by design but still thrown out of bounds.

I know that slant has been working

but sooner or later its going to get jumped

need to hit a slant and go

was thinking the same.

1st and 10 7 yard scramble by Anderson

2nd and 3 no gain run oliver

4th down....thought about going for it didn't.

Pitt at the 1 is in goal line formation we counter with....the 4-3...Pitt just wants to get to the line and kill clock....so why aren't we on the line to push them back???

I screamed that at the top of my lungs about 10 rows behind the UB bench in Tennessee, ....if its 3rd or 4th and 1, or the other team is on their own 1 yard line...why are our linebackers 5 yards off the ball...get aggressive!

Pitt gets a yard, runs out the clock and ends the half. The first quarter dominated by the Panters, the 2nd quarter by the Bulls but both high-octane spread offenses only manage one score each. Pitt 7 - UB 3.

I think any of us would take this score. Right in the game, with ball at half. Lets see Quinn make some half time adjustments

Halftime adjustments? We have a few comedians in the house...

And I'll close with my favorite segment of the game thread: 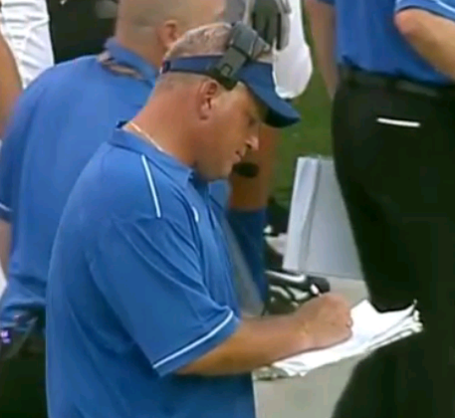