The Bigger they are the harder they fall!

In what might be the biggest challenge ever for the inquisitor Bull Run invites Rockey Top Talk into the Chamber!

Yes Rocky Top Talk, one of "The" College blogs of note. They have been doing it since the BG (Before Gill) Era and continue to grow. Unlike a lot of sites that are mainly one man shows RTT brings a phalanx of knowledgeable fans.

They were kind enough to have me on their weekly podcast this weekend so I thought I would return the favor.

So how does one torture the truth out of fans of an SEC team who run a blog that has literally seen it all? Two words... Plastic Surgery!

Bull Run's crack team of plastic surgeons plans to work over Chris Pendley.Were not talking about a mere nose job, or a tuck here or there. No, the Burl Run corps of Plastic Surgeons hones their skills on the set of "Face Off". This time, however, there is no infiltration involved. This time We plan on giving him a donor face and then turning him loose in Neyland Stadium. What will the handsome devil look like? 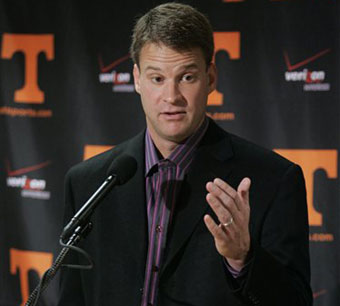 I think you see where this is going. Why get my hands muddy when I can just turn Chris, errr Lane, loose ie Neyland Stadium so that the Tennessee faithful can take care of my dirty work.

This wonderful plan fell apart when a near unconscious Kiffin was wheeled into the room muttering something about beating Florida and singing Rocky Top. So while I ended up with the Information I needed, I did not get the satisfaction of (1) Ripping Lane Kiffin's Face off (I hate him as much as anyone else) or (2) Getting to use the laughing Gas while the Surgeons did their work.

So here is the information gathered:

1 - The Vols have had a history of playing MAC teams way closer than the fanbase might care to admit. What have you seen this year that gives you even the slightest pause heading into this contest.

If you asked me before the Florida game, I'd answer with something along the lines of our defense. However, my answer changed on our first third down after Justin Hunter did the blown ACL / blown MCL double. (It also helped that our defense acquitted itself reasonably well.)

Da'Rick Rogers is a legitimate #1 WR, but he's not Justin Hunter, and we don't know what our non-Da'Rick options look like yet. We need someone offensively to step up, whether it's DeAnthony Arnett, Zach Rogers, or someone else in the passing game, or Tauren Poole / Marlin Lane in the running game.

Our run game is a separate concern - one that, were Hunter healthy, we'd be able to gloss over somewhat. Without Hunter, our safety net is gone, and if nobody aside from Tyler Bray or Da'Rick Rogers can answer the bell, that spells trouble.

2 - Coming into the season most people expected something that resembles a balanced offensive attack. Is the pass heavy nature of the Vols a function of planning or just poor running?

I've been beating the pass-heavy drum for the last couple of years; it's kind of anathema to most Tennessee fans to be this pass-dependent, but we were winning converts based on our play the first couple of games.

Losing Hunter changed everything; I do expect that we'll still lean towards the pass, but that's as much a function of what we do well as much as it is our inability to do other things like run block or find holes. Our running game is kind of a mess; I'm working on a theory involving practice time, our offensive line, and blocking schemes, but I don't know if I'm right.

Regardless, our run game simply needs to get better, and that needs to happen soon. Will that affect our offensive balance? It may, but not severely; Tyler Bray is still going to be more dangerous than anyone we put on the field.

3 - Six sacks allowed in three game seems very un-SEC like, to an outsider. What is the state of Tennessee's offensive line?

Doing some raw math, it looks like we've had six sacks on about 120 dropbacks or so, or a 5% sack rate. That's not awful, but the raw numbers look bad because of the number of dropbacks.

In Otherwords: We only have a 5% Sack Rate, How do you like them apples!

Our offensive line is fairly capable as far as pass protection goes (inexplicably, Montana gave us fits, but that may be a function of one or two guys on the line just not being ready); however, run blocking is a different matter. That is a wee bit sketchy, to put it nicely; to put it bluntly, it's been twelve different shades of bad and needs fixing yesterday. Whether we can fix the run blocking issues while still retaining the pass blocking prowess is one of the keys to the season.

Jump over to RTT to see it from teh other side