Share All sharing options for: Verbally Yours: Patrick Clarke 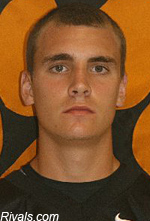 Losing two kickers to graduation would have been a hard blow to absorb, losing two more to transfers left the Bull with no kicker on the roster. Jeff Quinn and company have remedied this with the verbal commitment of Patrick Clarke.

Patrick was highly touted by Special Teams Solutions. Lee McDonald, a former kicker at Rutgers and director of STS called Clarke "One of the top Kicking Prospects in the North East".  Some of STS's past products include Casey Barth of North Carolina and Dan Hutchins of Pittsburgh for being named to the 2010 Lou Groza Award Watch List, given the the nation's top college kicker.

The Kicker has been playing for Hargrave Military Academy and During the National Camp Series Combine he went 10/10 on FG's from 35-52 yards.