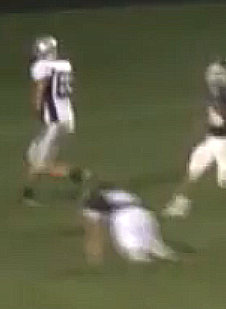 This is a welcome addition to a team that is losing two tight ends this season (Marr and Brey). It will also be nice to add a solid receiving tight end to an offense that could use every weapon possible to avoid a repeat of 2010. ESPN praises his catching ability:

He has solid height and bulk and while he still needs to add more size he should be able to fill his frame out with time in a college weight program. As a receiver he flashes good hands. You would like to see him more consistently catch the ball away from his body, but he does flash the ability to extend his arms and snatch the ball out of the air. He displays good concentration to look the ball in and catch it in a crowd. .

The Tight end from Robesonia, Pennsylvania has some work to do as a blocker

Weiser can be a solid and productive target in the passing game, but will need to also be able to contribute as a blocker. He will line up in an in-line position and displays some toughness. Blocking though at this point is a bit of question. Weiser displays that he can contribute some in the passing game and could be a solid addition if he can also produce as a blocker.-- ESPN

Weiser was recently named second team all state (AAA) by PAPreps.com and chose buffalo over an offer from Toledo and interest from Bowling green and Virginia.

Video and Recruiting update after the Jump: