Redshirt Freshman (2013): Played in 4 games recording a tackle against UMass

Redshirt Sophomore (2014): Played in all 11 games on special teams recording tackles in 4 of the last 5 games of the year.

Outlook: Stancil has moved from safety to linebacker, which is curious because he is listed at only 5'11 204, which screams strong safety to me. My best guess, is if he hits the field it will be as a cover linebacker in a obvious passing situation. He should continue to play on special teams, but we'll find out his role on the defense as we see more from the new defense.

By the time UB faced 12-0 and twelfth ranked Ball State in the MAC Championship, Buffalo believed they could win. If Turner Gill could win the East division with a team that before him could barely win a MAC game, then by all means he could win the whole thing. 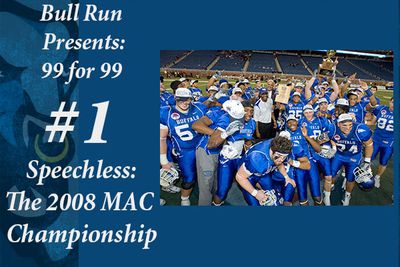 That belief grew stronger as a Ball State fumble recovered by Raphael Akobundu quickly led to a Drew Willy to Naaman Roosevelt TD pass and a 7-0 UB lead. However a Ball State TD and a James Starks fumble led to a BSU field goal as time expired in the half, Ball State led 10-7 but the game was still up for grabs.

Buffalo exploded out of the half with a 7-play 80-yard TD drive to give UB a 14-10 lead. Starks broke an 18-yard run before Willy found Roosevelt for a 39-yard TD pass. BSU answered and at 17-14, the game started to resemble a classic MACtion shootout. UB started their answer, but James Starks lost another fumble, giving BSU the ball 38-yards away from grabbing the games first two possesion lead. On 3rd and goal from the 8, Nate Davis scrambled left, and with defenders surrounding him, he dove for the end zone. Mike Newton hit Davis first, then Justin Winters and finally Josh Thomas knocked the ball loose. The ball fell right into the hands of Newton who was racing down the sideline before anyone knew what happened. The 14-point swing gave UB a 21-17 lead.

BSU drove down to the 15 but a botched snap was recovered by Sherrod Lott who speed 74 yards for Buffalo's second consecutive long fumble return and a 28-17 lead. Ball State's next trip into UB territory was ended by a Dane Robinson sack on 4th down. Their next drive ended when Adekunle Akingba striped a QB sneaking Nate Davis and recovered the ball. Six plays later Willy found Roosevelt in the end zone for the third time and UB had a 35-17 lead.

Ball State scored in 100 seconds, but their onside kick attempt failed. Up 11 with 4 minutes remaining, UB trusted their workhorse back despite his earlier fumbles. Starks rewarded the faith running 4 times for 25 yards and the games final touchdown. Ball State continued to fight. As the gatorade showers rained down on UB coaches, Ball State's last attempt at a comeback ended when Kendrick Hawkins tipped the pass to Domonic Cook.

It was the most important game in UB football history, and definitely the highest caliber victory in UB history. Despite high tension, and the Buffalo tradition where you never believe the game is won until you see the clock hit zero, UB scored the winning points with 15:19 remaining in the game and UB won by 18. The rest of this countdown will feature closer games, but I don't think there is a better game left on the countdown for Bulls fans.