Two teams who both think that playing defense is overrated. The Bulls take on the MAC East defending champ but a change in coaching and injuries has a new look in Bowling Green!

No one thought that Buffalo's offense would get better after losing the best running back in school's history, Bo Oliver, and the second best wide receiver, Alex Neutz.  But Buffalo's offense is rolling.  New coach for BGSU Dino Babers this week on Buffalo match up "Obviously people's averages have a tendency to have been going up when they play us, which is not good," he said. "But Licata can come in here and have one of those career days. We're very concerned about how well he throws the football, how good their throwing game executes." Two teams with great offenses and weak defenses.  BJ Fischer from Orange and Brown and I swapped questions. Here is your get to know article on Bowling Green 2014. 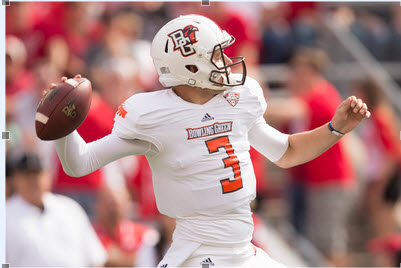 1.            Right now Bowling Green statistically has the worst defense in football.  Both teams had their buzz saw games of Wisconsin and Baylor.  What is happening on the defensive side of the ball?

No doubt, things are really tough for the BG defense.  They lost 6 starters from last year's team and now have lost the best d-lineman, best linebacker and best defensive back from the returning 5.  What you have left is simply very thin.  Against UMass, BG played 5 true freshman and 4 walk-ons.  BG covers poorly and tends to tackle ineffectively.  With the exception of the Badger buzz saw, BG has been pretty tough against the run.

2.            Buffalo cannot stop anyone in the air.   Tough loss with Johnson but seems like Knapke is up to the challenge.  Can you tell us about his game and how he is doing in the pocket?

Knapke is a traditional drop-back QB.  He will take off and run, but he doesn't do it very often.  He has been very accurate and poised in the pocket.  His biggest failing has been that he throws a lot of interceptions, like a lot of young QBs do.  He has certainly done as well as anyone could do under what were difficult circumstances.

3.            Travis Green is averaging over five yards per carry and is the real deal.   How do you think Green will do against a good defensive line that is geared more to stopping the run versus pressuring the QB?

Greene has been able to run effectively against pretty much anyone, and I would expect the same Saturday.  We are a "take what the defense gives us" though, so if the Bulls crowd the box BG will go to the air.  Most of BG's passing game is quick release stuff, so there usually is not as much worry about protecting the QB as in a normal passing offense.  Finally, don't forget about Fred Coppet, who is also a very effective RB who can get yards in big chunks.

4.            Losing Clawson (and Elko) to Wake Forest, tell us how the transition has been to Dino Babers?  Likes to run a fast paced offense. What kind of coach is he?

It is difficult to find a more night-and-day transition that from Clawson to Babers.  Clawson was old school...balanced attack, a solid set of power formations and a very solid defense.  Clawson--from Youngstown NY--had a Yankee bearing.  Babers comes out of the Art Briles coaching tree.  BG runs the "FalconFast" offense, snaps the ball quickly and uses what essentially is the Baylor playbook.  Beyond that, Babers is glib, funny, confident and emotional.  With the struggles--especially on defense--a lot of fans are bailing on the Babers choice early, which is at least premature.  He was highly successful at Eastern Illinois and you can't get a fair test of the program with all the injuries this year.

5.            Hate to bring up a tough point but the injuries have been terrible especially with Gallon and Johnson.  Are the young players stepping up and how is the depth at BGSU?

Injuries have been really bad.  Beyond Gallon and Johnson, the team has lost DL Zach Colvin, LB DJ Lynch and SS Ryland Ward....as well as WR Geiter Dehrig for the last couple of games as well.  On offense, the young players are stepping up fine, but as noted above, the defense replacements are really struggling.  On the plus side, they did force turnovers against UMass, including a very athletic INT by true FR Nick Johnson and a big strip by R-SO LB James Sanford, who is seeing his first real action. 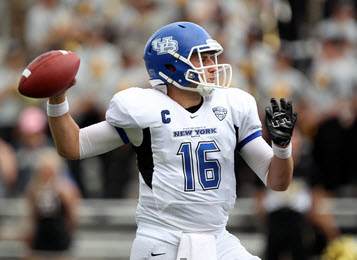 The fan base knows very little about this team.  Many expected the Miami game to be closer than one believes a team with twenty straight loses playing on the road for a homecoming game to be.  The Bulls were dominant is all aspects of the game except the score board.  The Bulls have really struggled with special teams.  Clarke the kicker has missed field goals and having issues with extra points.  The return game on punts is non-existent this year.  For as good as the offense is this year, the defense has struggled.

The fan base is waiting to see what happens with this team.  This is a real big test for Quinn and the Bulls.  The Bulls failed to answer the bell last year especially the loss to Bowling Green.    Here is an article that I wrote on Quinn Can Quinn create wins.  The question is can Quinn coach the Bulls to a victory over a evenly matched team?  I refuse to discuss Army and will not ask you about Western Kentucky.

2.            Obviously, last year's team lost a big-time RB in Oliver.  You had seen a little of Anthone Taylor, but he has been pretty productive.  Did you expect what you are getting from him?  What kind of runner is he?

Anthone Taylor every week is getting stronger and stronger.   Very little was expected after losing Buffalo’s all time running back.  Buffalo has gone from Starks (Green Bay) to Oliver (San Diego) to now Taylor.   I am going to sound like a coach or running back right now, but much of the credit has to be given to the offensive line.  This is a line that has five returning starters from last season.  The only person that will have a chance of NFL scout eyes is Andre Davis and featured earlier this year: #37 Mac Player Andre Davis Taylor every week has become more patient and allowing the holes to develop.    He is a larger Bo Oliver.  He can run you over or run around you.  The Bulls are without sophomore Jordon Johnson with a knee injury against Norfolk.  Johnson looked more explosive and many in the fan base were asking for Johnson to be the feature back.  All Taylor did last week against Miami is rush for 222 yards (27 yards shy of UB’s record set by Oliver) and three touchdowns.  Taylor last week was the best player by far on the field.

3.  Licata is having a really nice season.  He's 2nd in the MAC so far in passing efficiency.  Are you surprised at the progress he's made?  What's changed?

Not surprised at all.  Licata is only a Junior but feels like he has been in Amherst for a decade.  Licata is a very smart quarterback who loves to compete.  Licata does not have the rocket arm but what Licata can do is pick you apart.  As much as fans were concerned of losing Oliver, many more worried about losing Fred Lee and Alex Neutz to graduation.  The fans have been pleasantly surprised at three WR’s who have stepped up and all made big plays.  The three headed tandem is Ron Willoughby, Devon Hughes, and the best surprise is red shirt freshman Jacob Martinez.  All three can get open and run after the catch.  Licata also has two solid TE’s in Matt Weiser and Mason Schrek who can block for the running game but also catch balls and move the chains.  Weiser had a beautiful 31 yard TD last week against Miami.  This is where I am too excited on a Tuesday for a MAC game on Saturday.  Buffalo can and will throw the ball all over the field and this could be the most entertaining game of the weekend if you are in to offense.

You saw how excited I was over the offense; well, now you force me to talk about defense.  The pass defense has struggled and is the Achilles heel for this Bulls team.  The lack of depth was so thin that Buffalo converted who many to believe the next best WR Boise Ross to defensive back.  To Ross’s credit you saw his game getting stronger especially as the Miami game rolled on.  The Bulls also have very little in the way of a pass rush.  The Linebackers who made so many plays last year are not at the same level.  Last year so many teams worrying about Mack allowed other players free to make plays.  Bowling Green will move the ball through the air on the Bulls.  The weather looks to be 70 and not a cloud in the sky.  This has MAC shoot out written all this game.

The Bulls can go on the road an absolutely win this game.  The Bulls team can also let you score 100. The Bulls offense is more potent than Umass but we struggle to stop anyone. The team who scores last is going to be the winner of this game.  This game goes a very long way to deciding a wide open MAC East.  No one expected UMass to step up in compete level this year like they have.  I have no clue what is happening at Kent.  Miami has leveraged much of their future with older Notre Dame transferees but understand the pressure to win now.  Miami will shock a team or two this year.  Watch out for Akron and look at Ohio always staying tough and in the mix.  To see the Bulls prediction and break down of this game live, be sure to tune into Last Bull In video podcast joined by your very own BJ Fischer.   The boys at Bull Run along with BJ will break down the key match ups, highlight key players, and provide you with our very own predictions.    Show is live Wed. night at 11:30 PM and a taped version will be on website afterwards as well.