The postgame meal hydrates, nutritionates and breaks down the previous game. It's the PGM's 6th season, I've wasted my life away. The PGM is filing a trademark for that thing we call defense™, because it surely isn't what the rest of the nation considers defense. It has no use in football, but maybe it will have profitable applications in other industries.

At first you think, that sounds awful and stupid. Then you're walking through the grocery and you think well they wouldn't make them if they tasted awful, you're hungry, (never shop hungry) and you're curious, so you go for it. You take the first bite, and it's awful, you are going to throw $5 dollars out the window, and trash the rest of the bag.

That was this game, we didn't like it when it was announced, then we (or at least I) warmed to it, but then it just was awful. The rain delay hurt student interest, (and I don't blame them, 3 hours in rain soaked clothes is no good), and then Duquesne treated those who stayed to a game that was too close for comfort. If this was the effort we are gonna give during the year of the cupcake, Danny White would have been better off scheduling body-bag games.

I moved recently and for the first time in my adult life I had a pretty comprehensive liquor cabinet. I don't entertain much, and when I go liquor, I usually go Irish whiskey or rum, so the tequila, Grey Goose, Jack Daniels, etc, sat untouched. Well I had to pour most of the liquor out for my move, but I tried my best to drink as much as I could. I had some Bud Light Strawberitas, left over from 4th of July 2012! They were probably expired. I drank them, cause I ran out of whiskey and I didn't have mixer for my rum. That's your post game drink the desperation drink in your fridge.

In my case Old, expired, not good to start with, Strawberita. Feel free to add your desperation drink in the comments or @ubbullrun on twitter like so:

@UBBullRun If I ran out of good alcohol & UB was getting beat down by Duquesne, I’d drink those bud light strawberitas in my fridge. #ThePGM

I don't know why this song came to me, but maybe because this part:

I feel joy I feel pain, 'cause it's still the same

It sums up my feelings on the coaching staff right now, but i'll get to that below, for now, enjoy the Euro-techno stylings of Real McCoy's Another Night.

This song is 20 years old, so older than most current UB students.

For some reason, I feel like I'm the only one really upset by the game on Saturday. I shouldn't be "this" upset, but I am, and I think I know why. I think those who are ok with a "win is a win" know the team will build on this and get better, and I agree. However this is year 5 for the coach, and year 3 for the defensive coordinator, they shouldn't need to build or get better, they should have this coaching thing down.

Blowing a 21 point lead, and then winning in the fourth quarter is not a badge of honor, or a building block, it's an embarrassment. I feel bad for the fans and the players, who have to suffer through a scheme that continues to fail us both when we need it to win and when we don't.

I sent this text during the game to another UB alum: 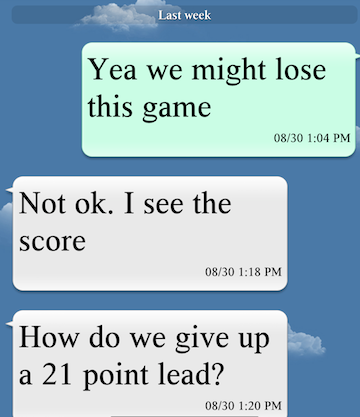 That text is not ok, and I had to crop out my response cause it got vulgar. 70-13 to Baylor I get, making Duquesne look like Baylor, I don't get.

The coaching won't get better, and I think I'm done hoping they will. I will look forward to the players developing around the imperfect scheme and hopefully doing enough to win more than they lose, in spite of coaching.

My big highlights from week 1 are:

1) The offensive genius of Jeff Quinn and Joe Licata on display during the Weiser TD.

2) Offensive schizophrenia aka "Bullcatting" - When Quinn reverts to the Cincinnati spread pass game for no reason.

Pre-snap, UB lines up with 3 Wide Receivers to the right, and Weiser and a running back to the left with Licata in the shotgun. 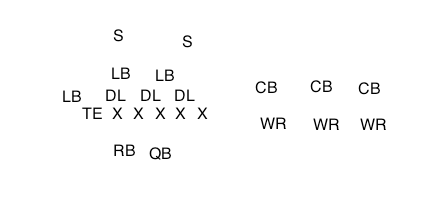 Licata sends Ross in motion to the left side, and the corner follows, a indication that Duquesne might be matching up man to man. 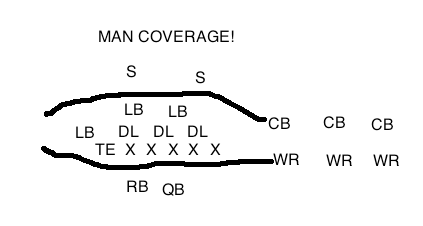 Right before the snap, Duquesne shows blitz from the strong side.

The Duquesne safeties crash to the strong side as soon as the ball is snapped, so Licata knows he's throwing left. Ross slants inside, the corner is indeed playing man, and the middle linebacker cuts in front of Ross preventing the short slant pass. The outside linebacker either by scheme or by accident, releases Weiser, who is running a wheel route, into the sweet spot, no one is there.

The photo is the exact moment where the CB follows Ross and the LB releases...Licata is already in his throwing motion, because he read the play perfectly. The five man rush is easily picked up, giving Licata a great pocket. Licata throws off his back foot and catapults the ball into the air, usually a no-no, but Licata has the play read so well, it was the best thing for him to do; he put air under the ball and let Weiser go get it. If the deep safety was still there, I'd want Licata to step up and rifle the ball into the TE, but on this play, Licata made the high percentage throw and it resulted in an easy six points. 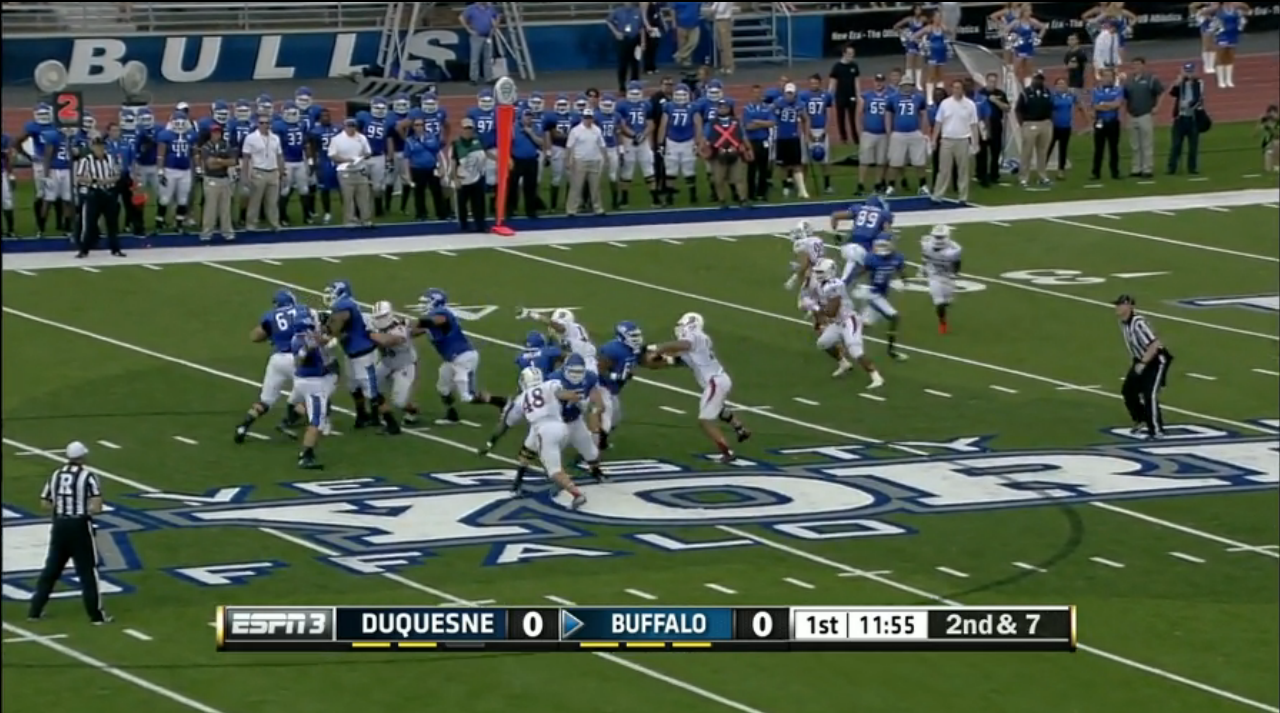 This is the Licata we want to see, the guy with 18 starts, and three years in the system under his belt, who knows what is going to happen before it happens.

BullCatting: TD Drives vs. 3  & Out Drives

What really scares me is the difference in run/pass ratio when we're doing well, and when were not. It reminds me of Toledo, and BGSU and SDSU and even Baylor. Games we lost when we left what we do well, and decided to shoot it out.

It was 3rd and 12, Buffalo at the 45, up by 7, with no momentum. Jeff Quinn calls a draw. This was dumb for the following reasons:

4) At the bottom of the picture below, you see one of our fastest receivers Boise Ross, given an 8-yard cushion.

A) He runs a go route, the corner holds the first down marker and you toss a deep ball at Ross, if complete, a momentum changer. If incomplete, you punt.

B) He runs a go route, the corner turns out of his backpedal, Boise sits down at the first down marker, if complete a first down. Big conversion, momentum changer. If incomplete, you punt.

C) You just throw it to Ross as soon as the ball is snapped. He now has 8 yards of cushion, and a lot of open field to try to convert against a non-scholarship cornerback, if he fails to convert you punt.

The Worst Defense™ Ever: 2014 Edition

This is our defense™:

We are in the 3-3-5, with a corner playing press coverage with no safety over top, and a corner with a cushion but also with a safety over top. This is illustrated by the photo below.

This basically gives the Dukes two options, throw it short for an easy five-to-ten yard gain, or test your luck on the one-on-one coverage. I think we are actually conceding the 5-10 yards, and we've seen games in the past 2.1 years where a team has just taken the 5-10 yards from our cushion for 3 hours.

Anyway the strategy reminds me of what you do to a poor shooting team in basketball, you clog the lanes, and give them a deep shot until they prove they can make it. I think it makes perfect sense in basketball, when conceding 3 points in a game of 60-100 points, represents only 3%-5% of an opponents scoring. But Saturday, these two big plays accounted for 50% of Duquesne's scoring, you can't concede that. 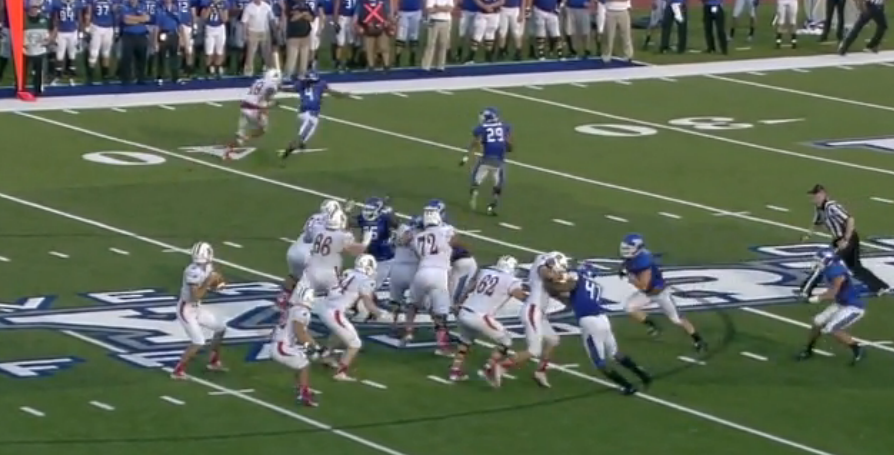 So the Dukes' QB see our lineup and although there is less than 10 seconds to get the play off, decides "yea we're going deep" and changes the play. In the picture above you can see Cortney Lester in coverage and Adam Redden in the no-mans land I diagramed out earlier. The QB immediately looks and starts to throw in Lester's direction, and Redden immediately recognizes that and attempts to get there, but instead of being a deep safety with the angle to provide support, he's in that stupid no man's land, and he really can't do anything.

Worst part is, Lester had great coverage, he just didn't make a good play on the ball. Which is what plagued Najja Johnson for a few years. 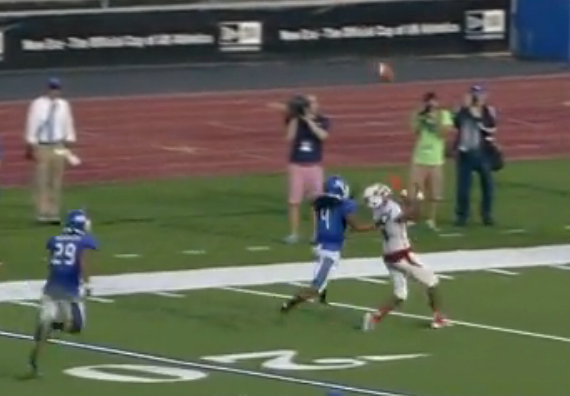 On the VERY NEXT SERIES, we show how well we make adjustments. 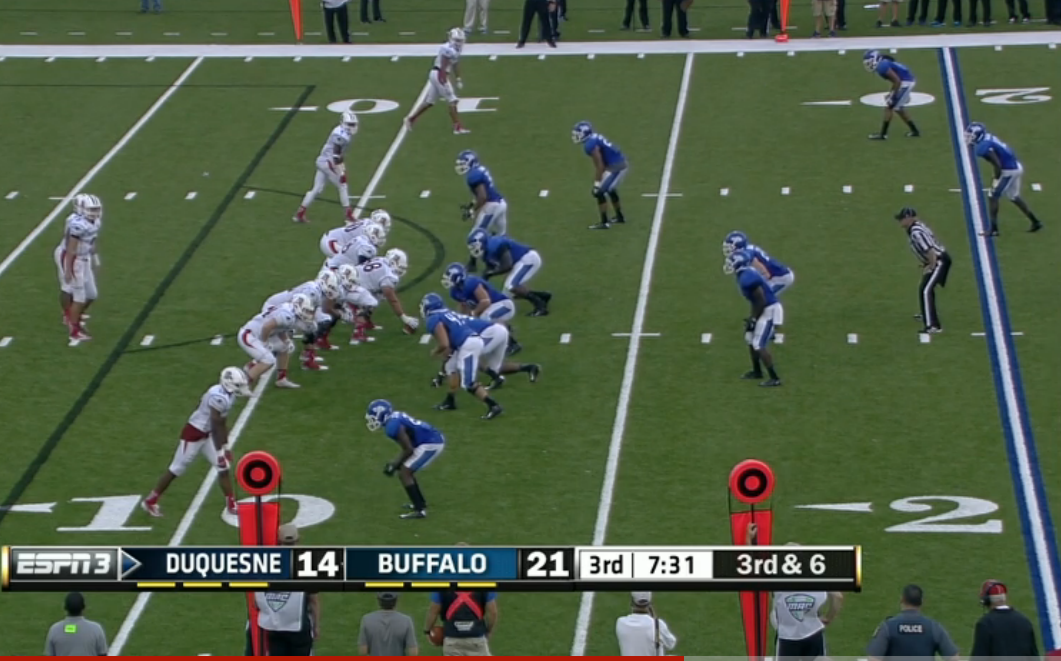 UB ran a tepid 4 man rush, with Soloki falling back to spy the QB. Duquesne kept 6 in to block, which means UB had 7 defenders to cover 4 receivers. Where were all these men? 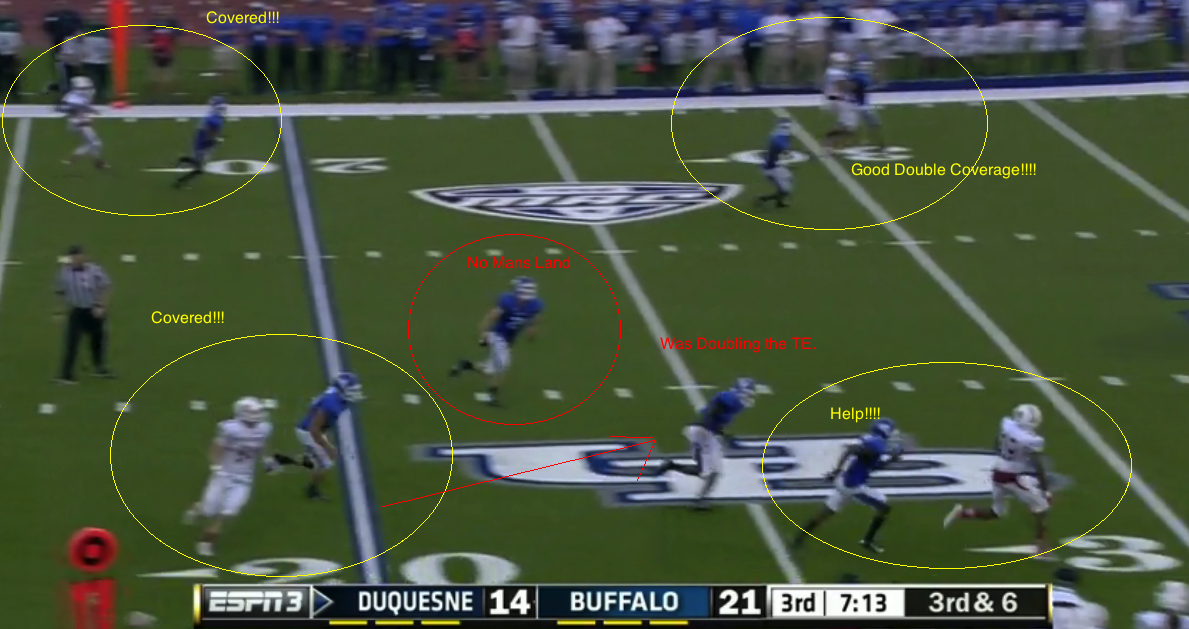 You can't blame Alozie for doubling the TE instead of helping with the deep man, because it's 3rd and 6 and he's lined up so close to the line of scrimmage, by the time he reads the play, he's out of the play.

If we adjusted our defense to look like this:

Alozie would have been behind the Striggles, he could have read the play, followed the QB's eyes deep, seen the TE well covered, seen Striggles fall behind his coverage. He would have been in the perfect position to prevent that big play from happening. My kingdom for two deep safety coverage.

Those are my highlights and lowlights for week 1.

As always, in spite of coaching, go UB, beat Army.