Share All sharing options for: Branden Oliver Vs. The Chargers' Depth Chart

First things first, every eligible number between 20 and 49 is taking. Branden Oliver will probably get #21, like Frank Gore. Good number, famous in San Diego for LaDainian Tomlinson. 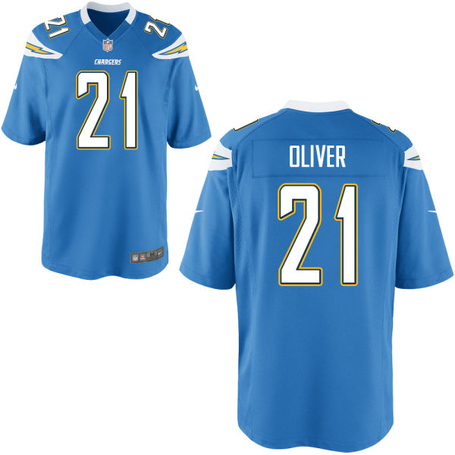 Moving on, San Diego has 7 Running Backs, with 4 likely to make the roster, and if the past is any indication, the #5 back on the practice squad will get a shot at the main roster at some point.

Comparing each running backs combine stats, BO lacks speed and lower body power, his 4.62 40-time is the 2nd worse of Chargers' backs, and his 117 Broad jump is 3rd worse. BO excels in Upper body strength, benching 225 more than any Charger back and 12 reps more than Marion Grice managed. BO also did well in change of direction and agility drills, posting the 4th best shuttle and the 4th best 3-cone drill. Donald Brown had the best agility times, while BO's matched up with Danny Woodhead.

No one will match the production of Danny Woodhead at Chadron State, he carried the ball 26 times a game on average, for 181 yards and 2 TDs. BO was the only other back to average more than 20 carries per game (21.12) and is 4th of RBs on roster with 98.76 yards per game. In the receiving game, BO trails behind the explosive Marion Grice who average 36 yards receiving per game and Ryan Matthews who averaged 14.11 yards per catch (Grice may have been aided by the ASU offense under Graham). BO only managed 16 rec yards per game and 9 yards per catch. Finally BO had the worst Yards per carry out of the group, at 4.68, while every other back earned at least 5.44 yards per carry.

Ryan Matthews is coming off his best season in the NFL, he was able to play all 16 games for the first time in his career and he ran for 1,255 yards, 4.4 yards per carry. He is solidly the starter.

Donald Brown is expected to be the backup to Matthews. Brown lost favor in Indianapolis who acquired Trent Richardson mid-season to fill the #1 RB role. Brown averages 4.3 yards per carry, but has never carried the ball more than 134 times in a season. Brown had a career leading 27 receptions in 2013 for 214 yards. Brown signed a 3-year 10.5 million dollar contract, but he will receive all 4 million in guaranteed money this year, if he doesn't work out, it would be easy for San Diego to part ways with Brown in 2015.

Danny Woodhead ran the ball 106 times for 429 yards, and should see many of those carries delegated to Brown. Woodhead did his damage in the passing game, with 76 receptions for 605 yards and 6 TDs, making Woodhead Phillip Rivers 3rd 70+ reception target, along with Keenan Allen and Antonio Gates. Woodhead is in the final year of his contract.

Kerwynn Williams with his 4.44 speed and team best shuttle time (4.15) the 5'8 198 pound back is the biggest threat to Woodhead's role of receiving 3rd down back. Woodhead has been so good at it however, I don't see him challenging Woodhead this year, but he could stick around and give San Diego leverage in their negotiations with the back next year.

D.J. Adams is smaller than BO, but the same speed and less agile. I think DJ will be the first RB cut.

Marion Grice was signed for 4 years totaling 2.32 million but only his 98k signing bonus is guaranteed. Grice is a tall back, but his 40 time was the slowest of all RBs on roster. In only 2 years, Grice caught 81 balls for 863, but he didn't run the ball often in ASU's spread pass offense.

Against top competition, Wisconsin, Stanford, USC, Notre Dame, UCLA, and Oregon, Grice ran on average 13 times for 57 yards, (4.2 yards per carry) and 1 TD, and caught 6 balls for 44 yards and 1 TD. When you look at his performance against good defenses, I question his running ability, but his receiving ability still holds up, again in the pass heavy ASU offense. Grice is also recovering from a broken fibula suffered late in 2013, his recovery from the injury could hamper his ability to be a 53-man roster player in 2014.

BO has the opportunity to make the practice squad on this team. If he displays good hands, he could be the next Woodhead in 2015 and his running style is very similar to Donald Brown's, so BO could contend to be Ryan Matthew's backup in 2015. As Woodhead is in his final year and Brown's money is guaranteed, the best BO could do this year is #4, if San Diego keeps 4 running backs on their 53 man roster. That said, Matthews has had injury problems in his career, and neither Brown nor Woodhead has been called upon to run the ball 20+ times a game. If an injury occurs, to Matthews or Brown, BO is the next best option at running back to grind out 10-20 carries.