Share All sharing options for: Does UB Basketball Lack Poise?

Buffalo has shown grace this year: in the season finale all five senior Bulls were allowed to start and play in their final home game.

Buffalo has shown composure: holding on to a big lead against a great WMU team.

Buffalo has shown dignity, improving after each loss.

Buffalo has had stretches of play that can only be defined as elegant and balanced.

But there are also the blown leads, the excessive celebrations, the technical fouls, the bad losses and the lack of complete 40-minute efforts that make me wonder, in spite of a 13-5 #3 seeded season, will UB's lack of poise ultimately be their undoing? Or will the delicate pairing of structure and chaos, which defines the '13-'14 Bulls, ultimately prove to be what UB needed to finally obtain the long sought after MAC Championship?

Three games in three nights will tell the story, but for now, reflect on the chaos of 2013-14 MAC play in comparison with UB teams of old.

Coach Hurley made an impact on the MAC Conference, he brought the Bulls to an outright MAC East Championship and left a reputation as the MAC's biggest complainer, for his outbursts of emotion on the sideline.

Often I've heard the remark that Hurley has had as many Techs this year as Reggie had his whole career, and the numbers back that up. Not only has Hurley's technical foul count been high, his emotion has rubbed off on the team.

11 of 27 technicals in MAC play since the 2004-05 season came this year, and previously mild-mannered Javon McCrea, with one tech in his first three years, notched four technical fouls in his senior campaign.

Lost in how the message was delivered, the person behind the O-Zone twitter page was upset with Javon McCrea's celebration after the Ohio victory.

@conradmostiller @UBBullRun The gun (or something like it) was later, which was just before he smacked the drum. The first "moves" were bad.

Javon allegedly made an obscene gesture (below the belt and so obscene that Zac Jackson's editor would not let him print his description of the gesture), and gave the Ohio Student Section the middle finger. As he walked off the court, he possibly made a gun with his fingers, and then he smacked an Ohio Marching 101 drum as he left the court.

I have a problem with Javon's actions for three reasons:

1. UB escaped from the game. UB was up big at Ohio, but barely escaped after letting Ohio come all the way back. When you limp out with a victory, you do just that, run out and thank your deity that the clock ran out when it did.

2. Fans are anonymous and thus are empowered to do and say lot of things they wouldn't say to someone's face. That's the deal, you sign up for, in exchange you get the attention of thousands of people watching you play. As a senior on a competitive team that many in conference just don't like, McCrea should be used to rough crowds. You never react to a crowd! The Ohio game showed a good reason why you don't. For weeks, one, (if not many), Ohio fan feels like he has the moral high ground when really, he's just upset with a loss. In a way, Javon took the victory away from himself and his teammates and his fans.

At the end of the day, it's best to send opponents and their fans home with their loss and nothing else to say.

3. IF you are going to play the heel, and use it to fuel the team to victory, fine.  The next and final hostile crowd Javon faced, at Akron, McCrea had a decent 15 point, 5 rebound game, with no offensive rebounds. You can't be the big bad wolf in Athens, and then play Little Red Riding Hood at the JAR.

The action as far as I have researched was not caught on film, and no public discipline was handed out. This could be seen as UB embracing the emotional outburst of it's star player.

Bad losses are a sign of a team that lacks poise, and UB's loss at Ball State sticks out as a game that cost UB a shot at a top 2 finish. So I looked at Reggie vs Hurley from 2004-2014 to see how Hurley in limited time stacks up to Reggie. 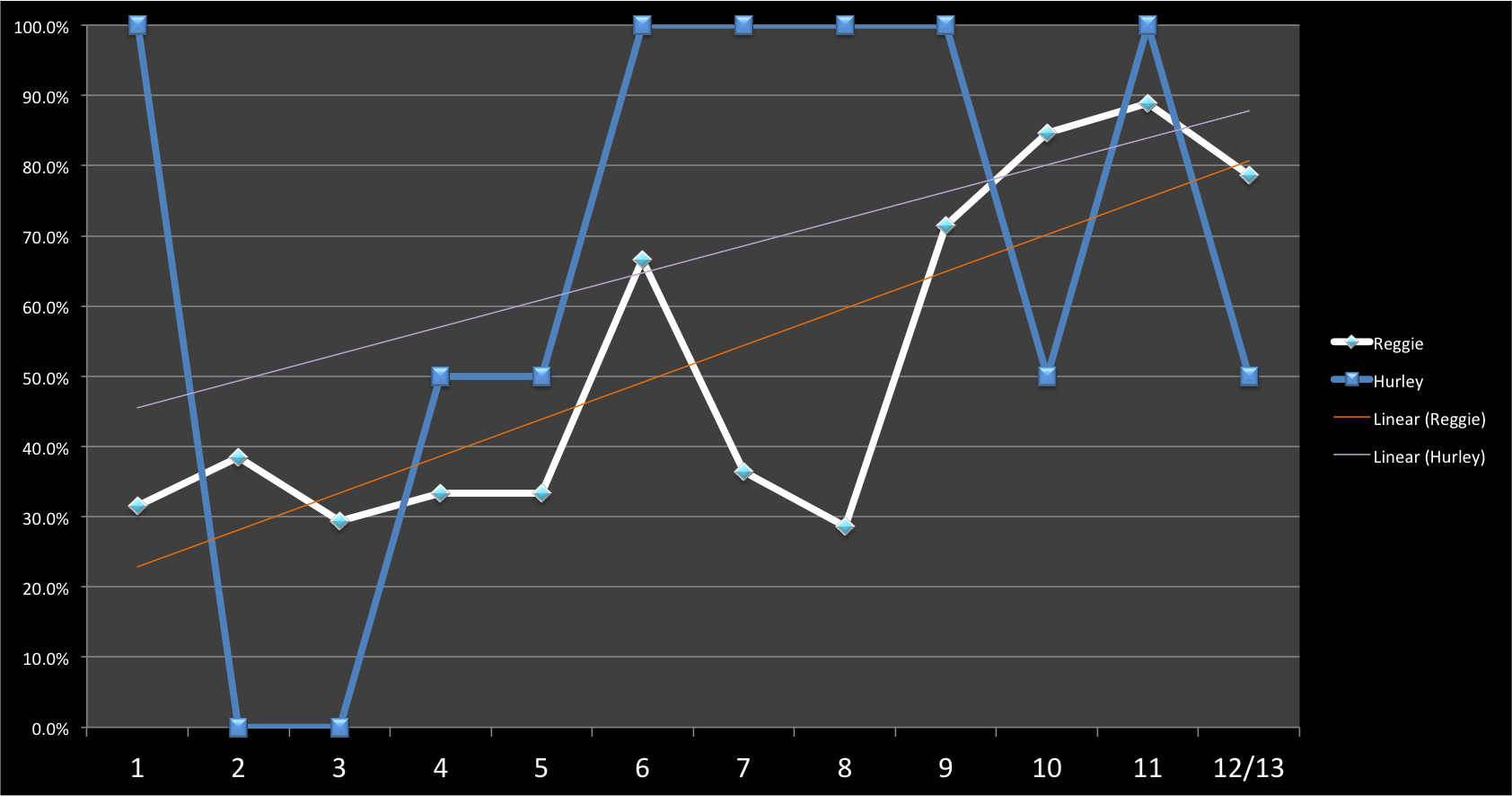 Hurley is so far better against the top 3, the top 6 and the bottom 6 teams of the MAC, but is worse against the 10th, 11th, 12th (and 13th) seeded teams in the MAC. Even in his two best seasons, Reggie was 33% against top 3 teams and 54.5% vs top 6 teams while winning 92.9% against bottom 6 teams, you could say Reggie made his career beating up on the cupcakes.

Reggie never let down, but he failed to dominate. Hurley took losses to the 2, 4, and 5 seeds, two of which were one possession losses. Unfortunately, Hurley also lost to the 10th and 12th seeded teams in the MAC, and those loses do point to a lack of poise. In this season's case, UB could have easily finished 15-3, by beating bad competition, which would have given UB a regular season MAC Championship.

Many feel it is too early to judge Hurley, or that this year's Tournament result is irrelevant when grading the coach. I am not one of those people. With the byes, UB will only play good teams from here on out. If Hurley's lack of poise cost UB a regular season championship, it is only okay if his intensity in big games leads to a MAC Tournament Championship. If not, we changed one extreme for another with the same result.

This year UB had a 17 point lead against Ohio with 16:30 remaining, but had to sweat out a 5 point win, (30th worse instance of lead management) 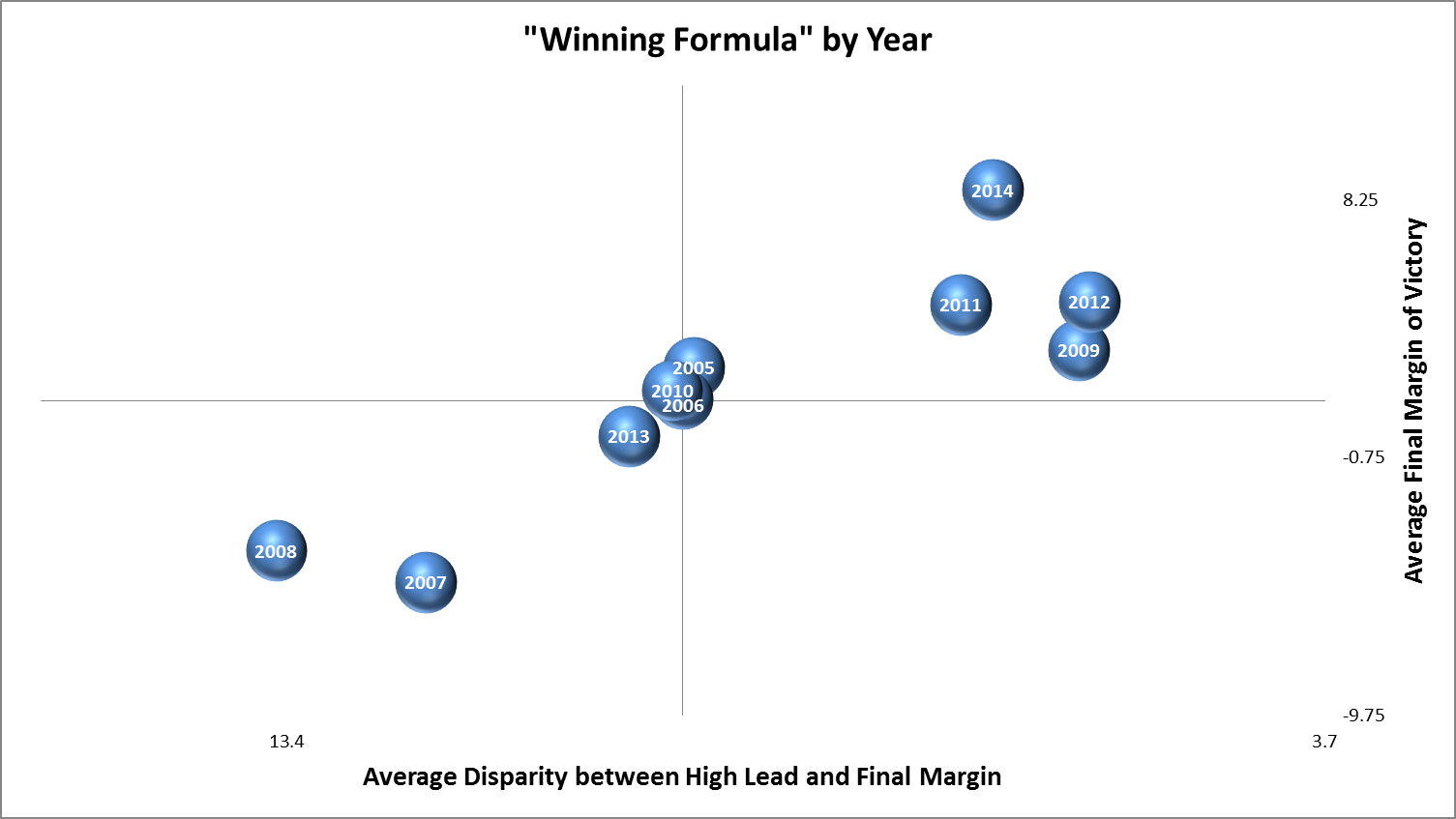 Winning formula is the average margin of victory plotted with the average disparity between UB's highest lead, and the final score (if your highest lead is 20, and the final score is a 2 point win, it's an 18 point disparity and bad. If highest lead is 20, and final score is 18, it's a 2 point disparity and good.) It's no surprise that the 2008 and 2007 teams that went 7-25 are at the bottom of this scale. You can see Reggie did not have a good winning formula, even with his good 2005 team, he broke out in 2009, regressed in 2010, had his best two seasons in 2011 and 2012, (although only going 9-8 in 2011, before regressing again in 2013. The Hurley 2014 team has blown leads but still have the third best disparity between highest lead and final margin. They have the highest margin of victory in a decade. 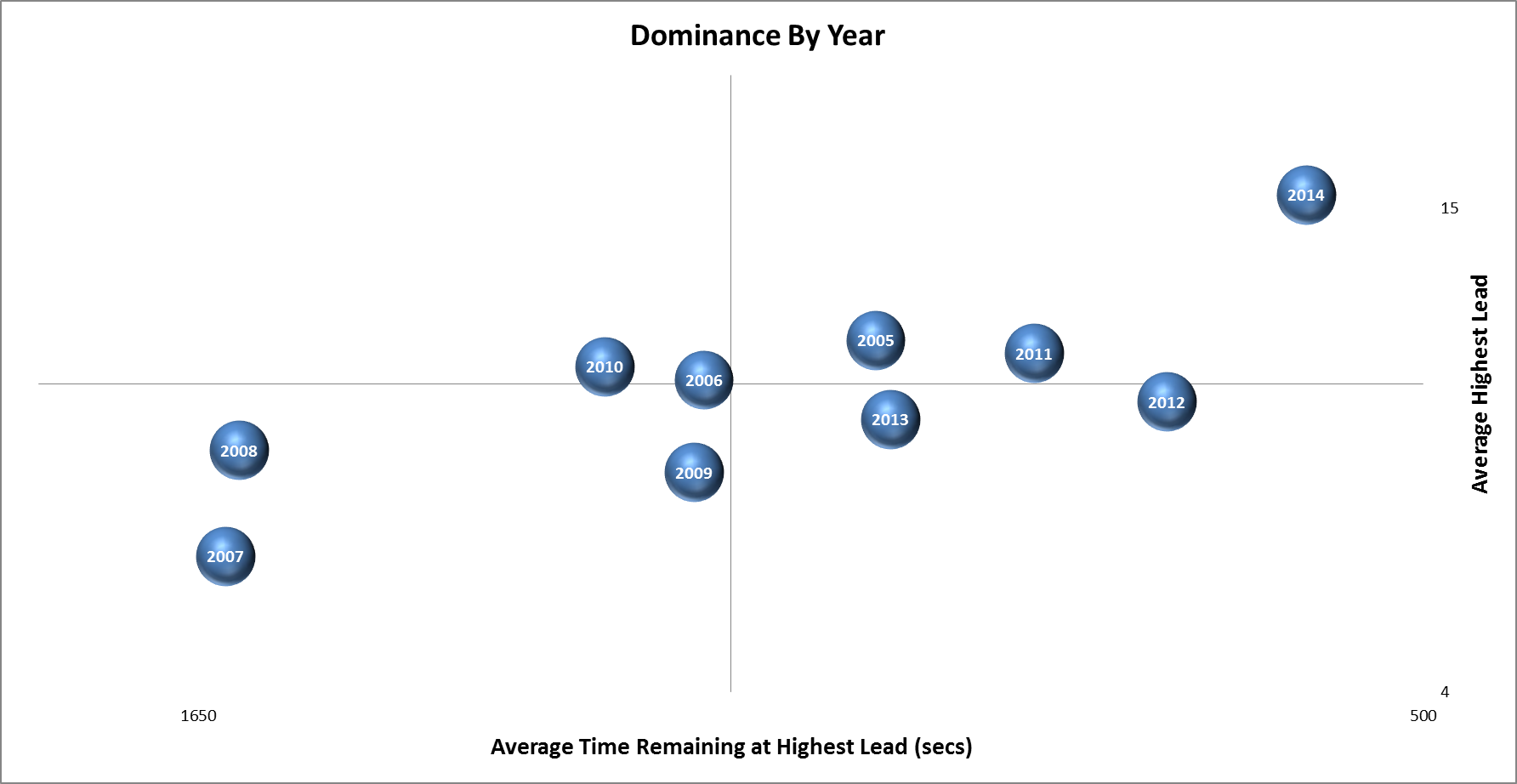 Dominance Index is comprised of the average time remaining at the highest lead, and the average highest lead. The theory behind this scale is that a dominant team takes a big lead, and takes their biggest lead late, as they continually add to the lead as the game goes on. As Reggie's teams hovered around center, Hurley's team is far and away the most dominant in the last decade of UB basketball.

But as much as I hate to admit it, I think it is a good thing. Hurley has brought in an aggressive new attitude and it has made UB more dominant. The team seems to have struggled at times this year with the transition, able to turn it on but not sustain, turning it on when you have to stay calm (McCrea fouling out vs BGSU), losing control more often, even erring to the inappropriate side of aggression.

But this UB team is being re-programmed to be an aggressive dominating team, and I think 2014's MAC schedule shows it is working. Will this cure UB's MAC Championship and NCAA Tournament drought? We'll find out this weekend.