Danny White has been described by both his supporters and critics as someone looking to make a splash. Those who don't support the young athletics director have characterized his moves and attitude as "Brash". People who like the direction in which White is taking the department call his decisions "Bold".

There is no doubt that White's vision for Buffalo is "Bold". His aim is to set UB Athletics on a path where the school will be viewed as the undisputed flagship of the State University system and a top-tier mid major, or bigger.

Decisions like "New York Bulls Initiative" are among his more provocative moves. His plans for UB's facility upgrades would move UB leaps and bounds above their current status. Those are the bold moves he has made and his critics and supports alike have latched onto those moves as being indicative of Danny White's thought process.

In point of fact once you get outside of the facilities and branding efforts of White his decisions have been far less audacious.

Two of his coaching moves made waves. The firing of Reggie Witherspoon and the 2012 extension of Jeff Quinn.

Witherspoon had a lot of love in Buffalo and White fired him after limping to a 14-win season in 2013. But Spoon had three 20 win seasons in the four years before 2013. Then White goes out and hires Bobby Hurley, a former Duke star with two years of assistant coaching experience.

That, I think qualified as a bold move but one that has panned out pretty well for UB. Buffalo won the MAC East outright for the first time ever. This year they are dealing with the loss of Javon McCrea, Joshua Freelove, and others yet the team is 4-1 with a loss against #1 Kentucky. In other words UB is having a very positive rebuilding season off of young talent.

As to the Quinn extension I'll still argue that the way the deal was structured White made the "Safe Play". Quinn won his last 4 games of 2012 and had a team loaded with talent for 2013. Of course, he failed to win the MAC East with that team and then cratered this year before being fired.

So the Quinn move, in hindsight, was not the right one. That does not mean at the time it was not the safe play. The financial structure of the deal means UB's only real hit might come next year and that assumes Quinn is not hired on somewhere else.

Those are the two things that the casual UB fan knows about. Quinn, Spoon, and Hurley. There have, however, been a ton of White hires which have not made much of by the local media. 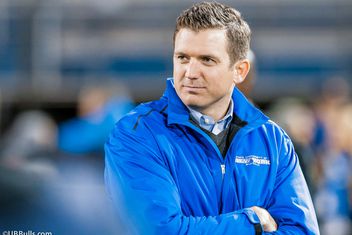 When Thanksgiving comes to UB Athletics, I am thankful for the across-the-board improvement on the field over the last two years or so.

Matt did a fantastic rundown of all the changes. You should give the full article a read but the nut of it is that White's coaching changes have almost all yielded better performance when measured against the Mid American Conference and none have really been worse.

The important thing to note is that White finds his new coaches from many areas and the "profile" of the hire seems to play little to no role.

Hires from within - UB's women's soccer team just won the MAC in coach Shawn Burke's first season. Last year he was the team's assistant and when his boss was let go he got promoted, in part because the team made an appeal for Burke, saying he was a great coach.

Poaching Mid Majors - The UB men's soccer team is building up behind Stu Riddle. He was the head coach at Western Michigan, a conference foe with respectable program thanks to his program-building efforts. White hired him away to Buffalo.

Area Connections / P5 Experience - Women's Basketball is coached by a former Big 10 coach, Felisha Legette-Jack. She is a coach who had mid major success, got to Indiana and struggled after three successful seasons. But she knew the area and had shown she can do well with mid-Major programs in the northeast.

Getting In on the Ground Floor - Bobby Hurley had his NBA career end because of an accident and the former Duke star stayed away from the game for some time. He joined his brother's staff at Wagner and then Rhode Island, and after two years Danny White brought him to Buffalo. Hurley was 95% name at that point and the media jumped on it.  If he takes UB dancing it's safe to assume he will be poached but in the meantime he is ours.

There is no formula here, other than finding coaches who will elevate the programs.

Now we can add a DIII football hire with no recruiting experience. The move is certainly a gamble and is thus getting a lot of attention but to me it's another example of White walking to the beat of his own drum. In the end UB's athletic director makes shrewd moves when it comes to making the teams better and bold moves when it comes to letting people know there is something special happening in Amherst.