First of all, I am very happy that two Buffalo institutions found employment this week. First Reggie Witherspoon stayed in Buffalo, and fortunately didn't go to one of the hated rivals, became AD at ECC. I am glad that he will continue to help young men in Buffalo develop as Basketballers and Men. Secondly, Lindy Ruff is back behind the bench and although I hate Dallas, I hope Ruff gets a Cup someday, just not against Buffalo.

A few years ago, the Buffalo media took a pep rally as a promise and now they are turning on GM Pegula like jilted schoolgirls. Unlike the Miami media who defended Lebron James' pep rally promise of not one, not two, even when things looked bleak, Buffalo's media spews tired cliches about who the Sabres are not, and who the Sabres should be. This year apparently we should be Boston.

How far are the Sabres from Boston? I don't think they are very far away. Using Pegula's first day as a start date, Buffalo is 6-4-2 against Boston while Boston is 6-3-3 against Buffalo. Boston has been 1 point better in head to head match-ups over the last 12 games.

Buffalo has outscored Boston 34-32 in those games and each team has had exactly 14 goal scorers.Vanek leads all scorers with 7 goals, followed by Marchand with 6 goals, and Pomminville and Seguin with 5.

After looking at Boston v. Buffalo in the Pegula era, the biggest difference between the two teams is consistency. Only one Bruin scorer is no longer on the team, Mark Recchi. Meanwhile 5 players who scored against Boston are gone, (Connolly, Gragnani, Brennan, Boyes (3), Pomminville (5)) which means a third of the goals scored on Boston are by people who were deemed not skilled, or mentally tough enough to beat Boston. Our goalie who many feel is done, has preformed admirably against the hated B's which is probably why they tried to take his head off.

While the Sabres were busy in the Eastern Conference Finals, Pittsburgh and Chicago were losing a lot.

Pittsburgh was a bad team for five years, and they were rewarded with top picks. The Pens still face a rough road, an injury prone star, a slumping star, a star who didn't reach potential and was traded, a star goalie who is done, and a star offensive defenseman when all they need is a shut down defensive defenseman (isn't it ironic?).

In the six resulting drafts, (extra one because of the lockout) Chicago didn't draft that well snagging Brent Seabrook, Towes and Kane, but also missing on Cam Barker (later traded to Minnesota for Nick Leddy), Jack Skille (later traded for Frolik) and Kyle Beach. Even the Patrick Kane selection was aided by jumping from 5 to 1 via the Draft Lottery. If the Hawks stayed at 5, the next available winger would have been Jakub Voracek who has scored 70 fewer goals and 46 fewer points than Kane in their careers so far.

The irony is the people who put Pittsburgh and Chicago on a pedestal are the same people who feel our two-year playoff drought is unacceptable. "Suffering" isn't brazen disregard for fans from a stubborn GM who refuses to do things the "right" way, "Suffering" was a concession speech. "If you want to be Pittsburgh and Chicago, well let's finish out of the playoffs for 3 more years and you'll get it"

Shuffling back to Boston.

Bucky uses Burke to condemn Darcy's trade process. Consider the source; Burke made Boston with his trade that resulted in Seguin and Hamilton for Kessel. In addition Boston fleeced former Toronto GM John Ferguson sending Andrew Raycroft, (Boston later said they planned to release him) for Tuuka Rask (deemed expendable). Looking over the last five years, the quote is less damning indictment of Darcy being out of touch and more damning indictment of Brian Burke's ability to evaluate talent.

Buffalo needs time, and they need size, the former will come whether we like it or not (may include suffering), the latter is being addressed through our prospects.

In other words, be more like the Buffalo Bulls, and less like the Buffalo Bills. The Bills have switched schemes, coaches, GMs and personnel constantly since I was a High School Sophomore, without making the playoffs. Well my ten-year reunion is on August 17th, so that is a mighty long time and an example of what NOT to do. 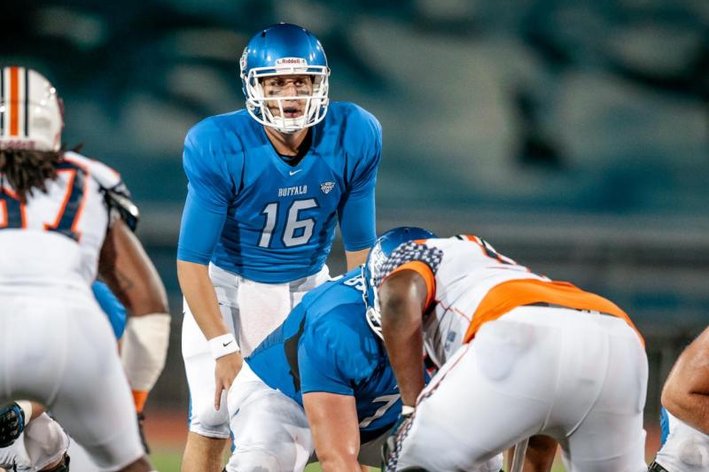 The Bulls, stood by their man, Jeff Quinn, and are now a quiet media darling in the Mid-Major circuit. Under Gill there would have been a subdued transition, one of the most talented UB QBs of all time, Zach Maynard, compensating for a very young team. Without Gill and Maynard, the bottom fell out, but now the team is experienced. Most of the main players are Gill guys, but the most important player will be Joe Licata, a Quinn recruit. At this point we just have to trust the system and our coaches and hope that everything works to plan.

The Sabres, also experienced a loss of key players, Briere and Drury, and they have yet to fully recover from it. Now is the time for patience, not panic. That said if Darcy presses the panic button and sends away Vanek and Miller, both major teams will be in for a long season, opening the door for Buffalo Bulls Football as the hottest ticket in the city this season. If that happens, Kool and the Gang won't be the only one's celebrating at UB this fall.