There's good news and Bad news, what do you want first?

USA Today has their annual database of athletic department spending up and as per usually it's a pretty mixed bag for UB.

Revenue was up almost 5% over 2011. UB's revenues crossed the 27 million dollar line for the first time and the Bulls climbed to the fourth highest grossing team in the MAC behind EMU, Ohio, and Western Michigan. They are up 6% over where revenues sat in 2009, the year after UB's bowl run brought revenues helped revenues shoot up four million.

Contributions topped out at 1.3 Million dollars, nearly double what UB has ever done. The previous high of 730 thousand dollars came in 2010.

Student fee contributions to Athletics fell. The amount of money the department garnered from student fees fell a slight bit. It's nice when you can say to the Student body that Athletic spending went up yet the kids at UB are paying a smaller amount than they were last year.

Licensing was up. This *might* have something to do with my wife deciding to replace all of my dated "Big Johnson's" T shirts with fresh new UB Tee's... What can I say... Best - Wife - Ever! 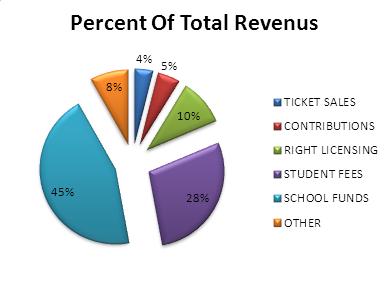 Ticket Sales are still less than 5% of our revenues. The number is slowly climbing but institution contributions "School Funds" are still the largest source of department funding followed by Student fees.

The trends are pointing the right way but it's like turning the Titanic, it's going to take a lot of time unless your rudder (wins and titles) is big enough.

This year UB won no conference titles and neither the football team or basketball team put their best foot forward.

It will be interesting to how the new ticket sales structure drives things. The seasons ticket prices are technically cut 50% from 180 to 90. But the donation component which buys you preferred parking and seat selection washes that difference out.

UB will also take a share of a much larger Bowl Money pool thanks to seven MAC teams bowling including NIU's trip to the BCS.

The Goal, of course, is to increase the revenue and spending while not putting the burden for that increase on the backs of the Students or the School. Athletics is never really a money maker but it can be optimized to not be a funding black hole.

The near term vision should be getting into the top 70 or so in revenues, that would mean 30 million dollars. It will be interesting to see if White's moved get UB closer to that mark.