From the Brink of staying home to Conference Champs, that's how we roll in the Mid American Conference!

Bowling Green went into the lase weekend of the regular season on the bubble scratched and clawed through the field in Avon to claim the Mid American Conference Baseball championship and a chance to advance to the College World Series. They did so at the expense of Ball State who, up until the championship game had been absolutely untouchable during the tournament.

Bowling Green put up all seven of their runs in the top of the fifth inning. That and a complete game four hit gem by Falcon's pitcher Nick Bruns ended a very good run of games for Ball State. The Cards, going back to the mid point of conference play, have seldom looked out matched and were never as dominated as they were today. 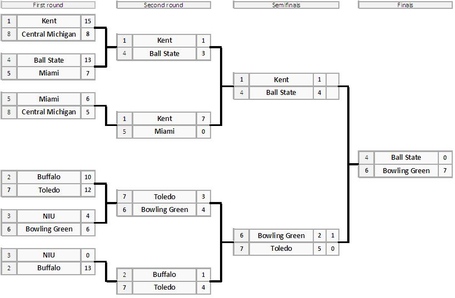 Bruns win, his second of the post season was so dominant that is secured him the MVP award. Bowling Green will now wait to learn their destination for the NCAA Baseball Championships Regional round.