The game might be tonight or tomorrow depending on how long Kent's game against versus Miami goes. The philosophy of the teams is the same as the last game. Buffalo wins when their pitchers play well and they get one or two explosive innings while Toledo wins when they can get an early hit and small ball they player around for a run here or there.

Toledo's offense is batting .281 in conference games but they don't thrive on extra base hits. The Rockets are near the top of the MAC in batting average and hit but fall towards the bottom of the conference in doubles, triples, and home runs. Toledo's offense, when they are on, will nibble their opponents to death.

Buffalo's batting order is a lot more polar than Toledo's and where they hit they hit long. UB's team average is also .281 but the Bulls are near the top of the conference in doubles, triples, and home runs. Despite that Buffalo is only averaging about one more run a game than Toledo.

Buffalo will be sending McGee to the mound, hoping he can do a better job with Toledo's early batters than UB pitchers did in the last game. 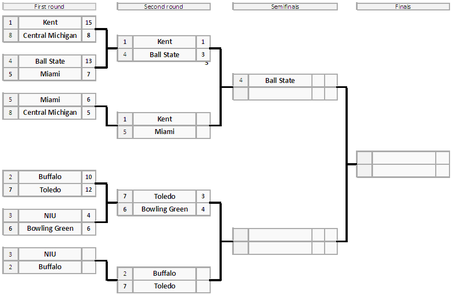