For the second straight year, and for only the second time in the schools history, the Buffalo Bulls are making a trip to the Mid American Conference baseball tournament. Unlike last year's team the 2013 Bulls are in the upper half of the bracket meaning UB has a more favorable first round draw.

In the first round Buffalo will be playing a rematch against the Toledo Rockets. During the regular season the Bulls took two out of three games from Toledo.

So Far This Season

In game UB went long. Jason Kanzler was one of four UB hitters to have a multi-hit game going three for four with a home run, a double, a single, two runs, and three runs batted in. Tyler Mautner and Jon Mestas hit the other UB home runs.

Mike McGee started for UB and earned his third straight win while River McWilliams earned his 5th save which set the program record for a single season.

UB needed a complete game one run effort by Anthony Magovney to make up for a lull in offense.

The game was 1-0 going into the bottom of the eighth when Jimmy Topps legged out a two base hit from s short hit over the first baseman head. The Rockets then walked Jason Kanzler. UB countered with Alex Baldock came in as a pinch hitter and bunted them both over. Toledo then gave Mautner a pass to load the bases. With two outs Jon Mestas came through in the clutch and hit a 2-2 pitch past a diving third baseman and shortstop to score Topps and Kanzler, who hustled home from second and beat the throw

Toledo finally got theri Small Ball on and UB's offense as stifled in a 6-0 loss. The rockets scored in every inning after the 4th while holding UB to just four hits on the game.

Toledo's offense is batting .281 in conference games but they don't thrive on extra base hits. The Rockets are near the top of the MAC in batting average and hit but fall towards the bottom of the conference in doubles, triples, and home runs. Toledo's offense, when they are on, will nibble their opponents to death.

Buffalo's batting order is a lot more polar than Toledo's and where they hit they hit long. UB's team average is also .281 but the Bulls are near the top of the conference in doubles, triples, and home runs. Despite that Buffalo is only averaging about one more run a game than Toledo.

On the mound Toledo's Wilkinson has been on a tear in the later part of MAC play, bringing his ERA all the way down to 1.14 in conference games, good for #2 in the conference. The Rockets also have a solid reliever in Tyson who has appeared in eight game games, getting three saves and sporting a 1-0 record with an ERA in the high 3's.

Buffalo will be sending Magovney back to the mound, hoping he can reproduce the gem he put up in game two of the regular season meeting. Overall against the MAC the UB Hurler started nine games with a record of 4-2 with two complete games. 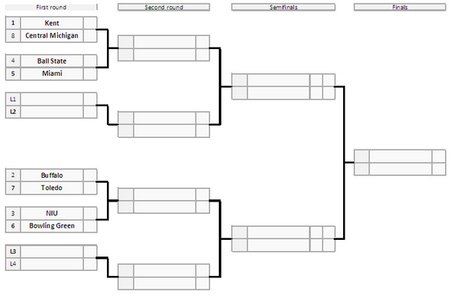 This is a double elimination tournament so while a team can lose and remain in the tournament it would add yet another game to the four minimum needed to take home the conference championship.