New to postseason College Baseball? Here is how the MAC tournament works:

The Mid American Conference Baseball tournament is unlike any other MAC Mens Championship in that it's a double elimination affair. With eight teams participating there are four first round games.

The winners of the first round games go on to play each other in the second round. The losers of those games have a play in game to remain in the tournament.

Illustrated (from the 2012 tournament):

Buffalo as the #8 seed last year opened up with, and lost to Kent. In the other first round game on that side of the bracket western Michigan beat Ohio.

So Ohio and Buffalo played a play in game, each already with one loss while Kent and WMU faced off both without a loss. Buffalo beat WMU sending them home and moving UB onto the third round. At this point Buffalo would have to beat Kent twice to reach the Championship game while Kent needed just one win over UB.

Kent Beat Buffalo and went on to the championships. 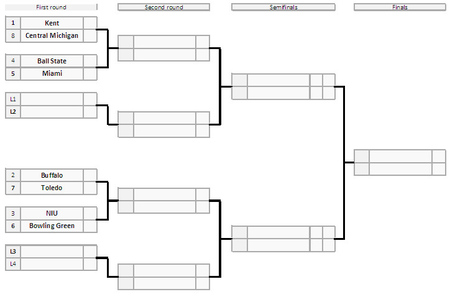 How they got here - Kent ran the table in their last two conference series' in order to catch up to, and pass Buffalo by a half game. Central Michigan needed a miracle and pulled on off with a win over Western Michigan while benefiting from a Toledo defeat of Eastern Michigan. CMU won the tiebreaker.

How they got here - Buffalo shocked everyone by not only qualifying for the tournament but by being just one two outs away from winning the whole thing. Toledo was a middle tier team all season never being too close to the top or too near the bottom. They won their final series to lock up the #7 seed.

How they got here - The Huskies were picked to finish last in the conference yet they led the west almost from the beginning of the year. After losing their opening series to Kent the swept Akron and never looked back. It was not until the final series that they were challenged by Ball State. BSU caught up with NIU by winning the first two games of the series but the Huskies put away the last game. Bowling Green was in serious danger of not making the tournament but their comeback win over Buffalo.

How they got here -Ball State went 11-3 in their last 14 conference game to roar back after falling out of the picture early. Miami went the other direction. After bursting out of the gate the RedHawks got cold and fell from leading the East to fighting for a top four seeding.

Play in Winners - Miami (over CMU), Bowling Green (over Toledo)

Round 2 Winners - Kent (over Miami), Buffalo (over NIU)

Round Three Winners - Buffalo (over NIU), Kent (over Miami)

Champion - Buffalo (This may be a homer pick because Kent has a deeper set of pitchers than Buffalo does).