The History of UB's Now Defunct Local Rivalries.
By Bull_Trojan and Tim Riordan

For 27 of the first 33 seasons of UB Football, UB played Rochester, Niagara or Canisius. In 23 of the next 47 seasons, UB would play Rochester, Niagara, Canisius, Brockport, or Buff State. UB went 49-35-4 in 88 games against those teams.

Under Jim Peele, UB only played Rochester twice and Niagara once. Peele was able to break the losing streak against rivals at 15 games, and under Peele UB was 3-0 against the two rivals. Frank Clair would then go 1-0-1 against Niagara at the end of the 1940's.

Officially on record as 4th highest attended home game in UB history with 22,740 fans (Tonawanda Evening News reported 24,217). Niagara QB Johnny Theobald threw for 3 touchdowns to lead Niagara to a 27-13 victory over Tracy LaTona and the Bulls. UB's effort was highlighted by Ray Dinnocenzo who scored on a 28 yard touchdown run. At the height of UB's (11-6, 1-1 vs NU in 1949-50) and NU's (6-3 in 1950) success, the rivalry died as Niagara ended their football program. Niagara's program lived on through their coach, Jim Miller who spent 1951 as an assistant at UB. UB ended the rivalry 7-6-1 against Niagara.

UB said goodbye to their oldest rivals in style. The Bulls improved to 3-1 on the season behind 232 yards rushing by O.D. Underwood and two Ken Crosta touchdown passes. Rochester's John D'Auria scored 3 times, but Rochester found themselves behind due to unconverted extra tries. Rochester's final drive of the game was stopped on 4th and 1 from the UB 26. Rochester won the series between the two teams, with 15 wins, 13 losses and 3 ties, however, UB won the final 6 meetings.

As UB moved towards division 1-A, the time of local rivalries would come to an end. In 1991, UB finished their rivalry with Brockport on an 11 game win streak in the series, defeating Brockport 30-28. UB led the series with Brockport 13-3.

As a D-!AA team in 1993, Coach Jim Ward felt UB had nothing to gain but everything to lose against Buff State. His feeling proved true as UB was forced to swallow the bitter pill of defeat against a lesser team in their final meeting with Buff State, losing in front of 10,000 fans, 13-6. In 1992, Buffalo came back to win after falling behind 15-0. In 1993 UB went up 6-5 but this time Buff State came back with a 23-yard touchdown pass late in the 4th. UB moved to the 17 down 13-6, but two shots in the endzone were unsuccessful and Buff State held on to win.

The rivalry was intensified by the increase in UB's status, Buff State players were determined to prove that UB was not Buffalo's College Football team. After the loss, Ward blamed the media for intensifying the intracity D1 vs D3 game. Despite enjoying a 7-3 series lead over Buff State, UB will have to live with losing the final game to Buff State forever.

Five years after the Buff State loss, UB would win their final game against a Western New York opponent, Canisius. Like the Bulls, the Griffs rebooted their football program in the Mid-Seventies and rose to Division I-AA as a member of the MAAC. But while Buffalo was getting ready to move up to the what was then D-IA (currently Bowl Subdivision) the Griffs were battling budgetary battles. The opposing trajectories of the two teams made the game's outcome a forgone conclusion, even the Buffalo News noted that nobody expected it to be a contest.

No one expected Canisius to compete, much less win this game. "Auld Lang Syne" was sung for this series back in 1991, when the Bulls, their ambitions for raising the level of their program completely clear, battered the Griffs, 49-7.It was the best possible way for an pronounced underdog to enter a game. No expectations for Canisius. No chance of embarrassment. Public sympathy, if not sentiment, in their favor. Just relax, play your best football and maybe a small miracle happens. With UB it was just the opposite. -- Buffalo News October 18, 1998

UB would move to the Division 1-A level the following year while Canisius would remain Division 1-AA. If things stayed that way, Canisius could have been an annual opponent of the Bulls in the way Villanova and Temple share a FBS/FCS rivalry. However, in 2002, Canisius dropped their football program. With Canisius and Niagara ending football and, Rochester, Brockport and Buff State in Division 3, UB was left on an island without a Western New York rival.

2013 will be the 15th straight year without a geographic rival. Until Buffalo improves and joins the ACC/B1G 10 to play on the same level as Pitt, Penn State & Syracuse, or Stony Brook and Albany improve to UB's level, UB won't know the exhilaration of the close rival again. Obviously we need to be FBS, but it's hard not to nostalgic about the battles of the 80's. 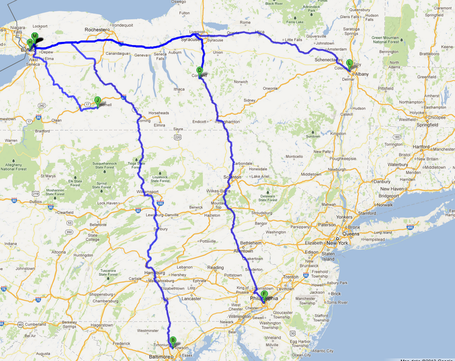 In 2013 the Bulls will travel to Texas, and play through the State Ohio totaling 6,418 miles. 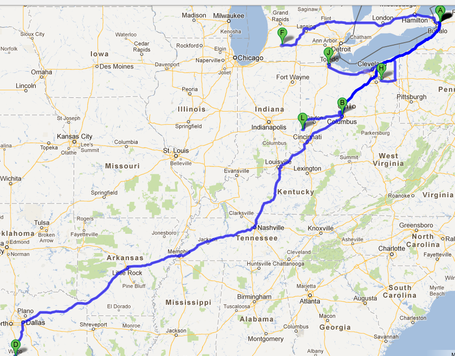 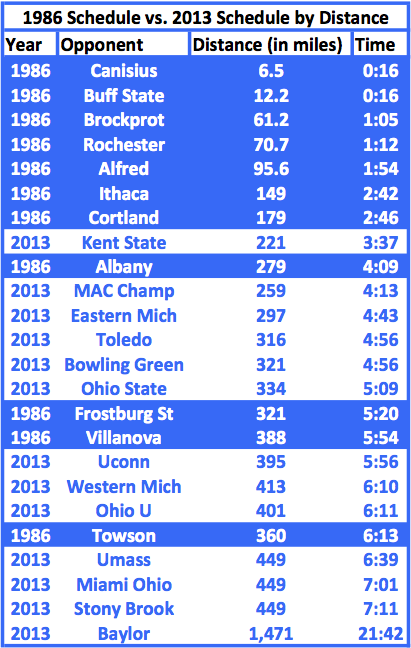