I would say this is finally rock bottom but UB still has a game against Northern Illinois.

The rule of thumb this season is that if Javon McCrea and only one other Bull scores ten plus points UB is going to lose. Tonight for Buffalo (8-15, 3-6 MAC) McCrea scored 15 points, Will Regan had 12, and it was just a mess after that as Buffalo was completely unable to manage anything positive against The Eagles (11-11, 4-4) zone defense. The damage was really felt in the second half as the Bulls shot just 28 percent iand put up a paltry 13 points.

Once again UB's troubles starterd with a run. Trailing by just two early in the second the Eagles would go on a 16-4 run kicked off by Bryant and Austin Harper hitting three straight baskets.

EMU played a typical Eagle game. Decent shooting and few mistakes. Led by Glenn Bryant who had 17 points and four blocks the Eagles shot 47 percent from the floor and committed just four turnovers.

UB has no perimeter shooting and whenever anyone puts a solid zone up against the Bulls the team looks helpless. How helpless you might ask? 28% shooting and a mess of turnovers, at one point Buffalo managed to score just 8 points in over 14 minutes of the second half. I think I've seen enough.. It's time to develop some perimeter shooting.

2) Paint is nothing to fear

Ideally break the zone with some solid perimeter shooting.... Not perimeter passing! All the endless series of UB passes did was give EMU a chance for fast break points on the turnover. Buffalo has perhaps the best forward in the conference and Buffalo spent a goot part of each possession passing back and forth outside the NBA three line.

EMU, for their part, was quite happy to watch UB toss the ball around 20 second at time before throwing up some wing and a prayer shot.. How happy? 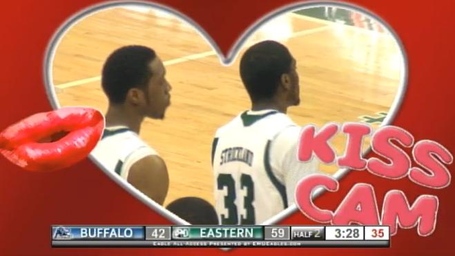 3) Not rock bottom yet

NIU is coming to town and a loss to the huskies could be the low water mark for UB basketball over the past seven or so years. If NIU has any kind of Zone I would not put it past the huskies to give UB trouble.