Everything was going right for UB when the 1901 season started then things went sideways when UB lined up to play Michigan. The colossal loss took the wind out of UB's sail and set the team on a course that would lead to the programs cancellation just two years later.

Share All sharing options for: A Century of Bull: 1901

Coming off of a disappointing 1900 season the University of Buffalo had put the pieces in place to recapture the power they had displayed in the late 1800's. The team had found some stability with quarterback Charles Rice. For the first time since Turk Gordon lined up at Full back Buffalo had a player who was a reliable kicker, a key component for any success for early 20th centuries teams.

As for Gordon, he was back as Buffalo's head coach. Gordon was holding down two coaching jobs at the time and would often pit the Buffalo team against his high school squad at Masten Park.

Buffalo started the season with four straight impressive wins. Starting with a big upset over Columbia. Early in the first half Rice hit a field goal which was all the stout UB defense needed. That 5 points held and the Bulls were off to a 1-0 start.

Following one of the best wins in UB history Buffalo would go on to shut out Lehigh University team by a score of 16-0 the following week in Buffalo. And then two more shutout wins against Case and Oberlin college.

At 4-0 UB had yet to yield a single point. The Buffalo squad headed off to Ann Arbor to take on one of the best college teams ever to play. Unfortunately for the Bulls their 4-0 run had left them banged up for the match. Ed Mills, Charlie Haase, and fullback Mason were all banged up going into the game. Mills and Hasse were not able to play and Mason was not anywhere near 100%.

Buffalo was so fraught with injuries that they had to cancel a game against Hobart the week before a match against Michigan. Even with those injuries many thought UB's defense would give them a shot against the Michigan Squad, they were wrong. 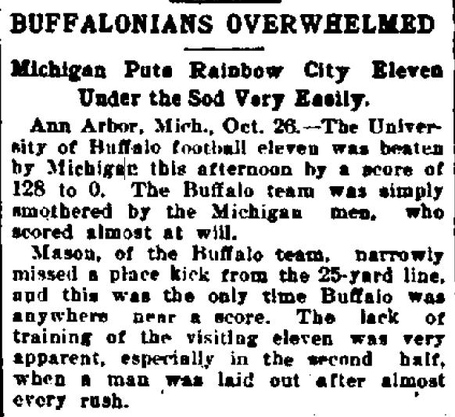 Aside from an opening drive that say UB miss a field goal the game was all Michigan. The Wolverines scored at will and smothered any UB offensive drive.

Albert Herrnstein led the scoring with six touchdowns, and additional touchdowns were added by Neil Snow (4), Willie Heston (3), Arthur Redner (3), Curtis Redden (2) and Bruce Shorts. In the end, the University of Michigan football team defeated the University of Buffalo by a score of 128–0. They did so in a game shortened by 15 minutes as Buffalo did not have the heart to finish.

The Rochester Democrat and Chronicle ran as subtle a piece as one could given the nature of the beat down. It was a story picked up nationally. The New York Times led with a headline "The Wolverines Administer to Bisons a Most Overwhelming Defeat".

Michigan would tear through the season winning their games by an average score of 50-0. They would take that perfect defense into the Rose Bowl and paste Stanford 49-0.

But the quality of Michigan did not make the defeat taste any less bitter to Gordon. Enraged by the defeat and by the team quitting with time left to play Gordon ripped into his players.

"I will play fullback in the next game and I’ll have a gun with me. The first Buffalo man who shows yellow, I’ll drop." -- Coach Turk Gordon to the Buffalo Express

The next week the Buffalo coach traded his clipboard for cleats as Buffalo had an exhibition game against the Watertown Athletic Association. No paper of the day documented weather or not he was packing heat during the game but his presence did help the Bulls put up a solid effort against the semi profession team. Buffalo fell 6-0.

UB finished out the season with a 17-6 loss to the Western Reserve Squad and had another cancellation against Syracuse. In the end UB had a disappointing record of 4-2 against college teams and would never really capture back the momentum lost after the Michigan game.