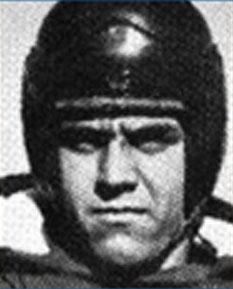 The '42 season was a season of feast or famine. The average margin of victory was 30 points, but in defeat they lost by an average of 10. To stop Buffalo you had to stop Lockport Lou. Hartwick learned this the hard way, allowing Lou Corriere to score 4 TDs. Corriere amassed a total of 8 touchdowns as he lead the 4-2 Bulls into their final home game vs rivals Hobart.

Hobart became yet another victim of Lockport Lou. Corriere rushed for 6 touchdowns, and threw for 2 more TDs. He scored on an 84-yard interception return as well, but the play was called back on an offsides. UB won 66-0.

After the 1942 season, UB football was suspended due to WWII and Corriere served 3 years in the army. When football came back, so did Lou. When his career was over, he set school records with 162 points scored and 23 touchdowns.

In 1965, Corriere was honored as one of the inaugural members inducted into the UB Sports Hall of Fame. He was drafted by the AAFC Buffalo Bills but was cut due to medical reasons after only 3 exhibition games. Corriere went on to teach at Lew-Port, and coached Super Bowl Champion Daryl Johnston.