After the dreadful UConn game, Buffalo traveled to SEC country to take on the Tennessee Volunteers. We usually get pummeled in these games, so the crowd fluctuates between: We'll lose by 50, hopefully we're competitive and...

I really believe that this could be a winnable game. Call me crazy!

The week leading up to the game was a love-athon for Khalil Mack, and it continued in the pre game.

13:12 Devrin Young's first Tennessee touch is a 40 yard punt return, the punter is the last man back and trips up the returner.

13:05 We give the Tennessee Receivers a huge cushion, they take it, gain 15 yards on 1st down.

11:58 End around by Neal, he could have crawled into the endzone, he showed mercy and just jogged in about half speed...apparently we aren't reading our keys. UB 0 - Good ol' Rocky Top Wooooo, Rocky Top Tennessee 7.

My replay is not HD so the screen caps look awful, but basically Tennessee lined up overloaded on the right side. The fake to the back sent Mack the contain LB on the weak side crashing down hard on the play...with Mack trapped inside there was no one to contain the reverse. Give Dooley 7 points for out coaching the Bulls on that score.

Coach BRJ with the 10 second recap:

Draw play called on thrid down, and then bad punt coverage, then three play UT drive

Our leader counters with the 5 second recap of the game and our season as a whole:

11:23 Chazz play action, nothing open (cause we've run for nothing why would they bite on play action?) Chazz runs for 21 yards and a first down.

11:00 Zone run to Oliver for nothing he got tagged. Draw to BO still nothing.

that catch has to be made IMO

There no opinion about it, he has to catch that

IMO, every pass play on throd down should be to Neutz

This time the punt gets no return thank goodness. Tenn starts at the 16.

They fake the end around, to Torran Poole UB expects him to jump into the pile, instead he bounces it out and uses the WR as a lead blocker... 25 yard gain.

5:55 Colby Way trips up Tyler Bray who chucks it out of bounds in a legal yet blatant abuse of the intentional grounding rules, he was out of the pocket, and the incompletion brings up 2nd and 10.

5:49 Run to Poole, every hand off we just look lost. Poole would have had 10 if he had just ran and not waited for his blocks to develop. He gets 6 anyway.

Everyone can see it but Quinn?

Going way to deep on the drops

I guess pick your poison, I'd rather a team beat me deep than continually beat me easy. But to each their own...College Gameday doesn't show 7 yard slants on highlight packages.

3:53 PA pass for a TD to Da'rick Rodgers, no pressure on Bray, but can I say an awful decision by him, this pass should have been intercepted and returned 99 yards for a UB TD. But the UB secondary is young...so buffalo 0, good ol' rocky top wooo rocky top Tennessee 14.

We see some never give up syndrome:

this may be ugly but its still the 1st qtr. need some major adjustments but I still have hope.

some blame 'em all syndrome:

I am changing my name to Da'Rick!

fake run, chazz ran it all the way 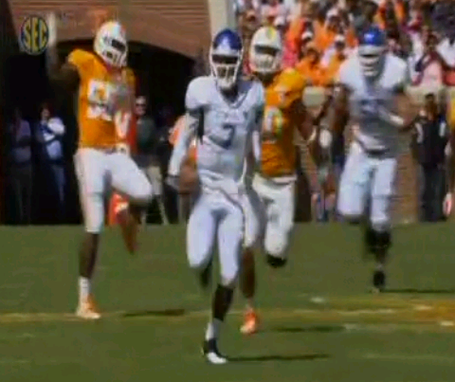 Muffed fumble recovered by the Bulls at the 22. Brandon Murie dives on it, instead of scooping it up for a score...altho you can't advance a muff, not sure if it was considered a muff or fumble...but could have been an easy td.

2:34 Fardon kicking 5 yards beyond his career long...and this one was partially blocked no good.

That was an embarrassing drive and kick

2:18, play action pass deep throw to Da'Rick Rodgers for about 50 yards down to the 17. Momentum restored.

What a tease that was. Then to give up a bomb!

Chazz's good will has lasted about 10 minutes:

Being who Chazz is when he came in

Great, he faked everybody out on his TD run

But I still need him to be a Quarterback

No one's arguing for Chazz to be taken out

but we need him to connect on those passes

In other wods, start playing Quarterback

:50 3rd and 3 from the 10. Tennessee lines up in the shotgun, we actually don't give a cushion, and the tight end drops the ball in the end zone.

:18 Play action naked bootleg, again really? play-action before establishing the run. Anderson takes a big hit, throws it away and it's almost intercepted...Anderson seeking treatment from the training staff.

As the quarter winds down some fans are worried about the Chazz injury:

Some excited to see actual football after the Rugby match last week:

WOW what a crazy quarter!

Some fans are contemplating on what could have been:

and some are looking forward to seeing Zordich in action again:

Tennessee flexed their talent, but also showed their youth, allowing UB the opportunity to quickly tie the game. UB shows its talent dearth failing in special teams, looking lost on defense and lethargic on offense. Our QB was the star of the show with a long TD, but we're not Kent State, so that's not necessarily a good thing. It also may or may not be Zordich time.

Check back for the conclusion of the first half.