I turned 27 on Wednesday, and have been out celebrating all week, and I don't think I'll stop. Today is May the 4th be with you, and tomorrow is Cinco De Mayo. In addition, there are Stanley Cup Playoff games, NBA Playoff games, and the Kentucky Derby this weekend...It's a great time to be alive, happy and enjoying the start of Summer weather.

If you are happy and an hour or two away from leaving work ready for a great weekend...you may want to close this now, and save it for Monday. From here on, the celebration ends as I bring you UConn at Buffalo, the low point of 2011 in my opinion.

If you leave now, I won't be offended, at a certain point, probably early Monday morning we'll have to leave the weekend behind and jump back into serious work mode...read this then, and think "well at least its not football season and we didn't lose to a 3rd rate UConn team who really didn't even bother to show up, yet still walked away with a victory, and at least its not snowing," (it probably snowed on September 25th in Buffalo)

Of course if you're a UConn fan by all means read now, crack a bottle and enjoy our misery you AD stealing jerks. (sorry, I really liked Warde and it still hurts)

Follow along on WATCHESPN where available, and you can take a look at the Gamethread at: http://www.ubbullrun.com/2011/9/24/2446297/gamethread-for-connecticut-huskies-at-buffalo-bulls#comments

15:00 The stands are full and we receive the kick.

14:12 Our runs sets up a play action toss to Gordon for a first down.

Catch by a tight end.. Drink

12:52: 3rd and 3 near midfield. Pass thrown 20 yard down-field to Rivers Incomplete... a lot of contact no flag, seems it was a catchable ball. Already some #Quinnball...throwing deep on a 3rd and short.

12:22 Johnny McEntee with the start...and I start to regret watching this game...Pasqualoni and Quinn seem to have the same playbook...2 identical runs bring up 3rd and 6.

11:00 McEntee scrambles after good pressure, doesn't get the first down, Mack was held, no call. Short punt fair caught by Jackson...oh my god, they're as bad as us we just might have a shot.

10:24 Oliver gets 6 on first down finding a great seam in the zone blocking scheme.

9:10 A weird play, Chazz instantly tosses the ball to Oliver on the short side of the field, giving Oliver no room to run. Announcers thought Chazz anticipated a blitz and threw the ball quickly, but the blitz was picked up...Chazz needs to read the defense better.

and thats a drink for 3 and out...
we need to work on our 3rd and short plays
by bull_trojan

7:44, Isiah Moore 15 yard reception wide open in the middle of the zone.

7:20 Fred Branch with a big hit after 7 yards gained on the sweep.

6:51 McEntee boots off the playaction and scrambles for the first down.

5:41 Isiah Moore 15 yard reception wide open in the middle of the zone...again.

5:05 Uconn brings in their running QB, who runs, but Mack is all over him...8th tackle for a loss leads the nation.

4:30 Went 30 yards deep to Isiah Moore in the end zone but well covered by Josh Copeland bringing up an overthrown 3rd and 10 to the Tight End.

i love when Chazz runs

3:20 Ugly play looks like all the linemen cut and they were looking for a slant or screen...but nothing was open, ball thrown away.

3:17 Slant to Hughes, wide open but under thrown.

3:10 Throw to Rivers, behind him but it hit his hands...5 straight passes, 3 straight misses by Chazz and we punt.

Such a promising drive,

I went to homecoming the year before, the weather was meh, the crowd was meh, and Temple beat us down...I wish we'd play our FCS game during homecoming so I could go home happy...

How does the crowd look?

Peck said he has never seen so many students..

UB 2020, enroll 20k more students, bump up the stadium attendance. I like it.

our lines are looking dominant

1:41 Wow they really stole our playbook...Huskies false start not called, then go with delayed hand off for no gain...4th and 21 they'll punt from their own 4. Jackson returns the punt, gets pass the 1st level of defenders but just as the excitement starts, he goes down unceremoniously.

Great field position starting on the 35.

Got to score here 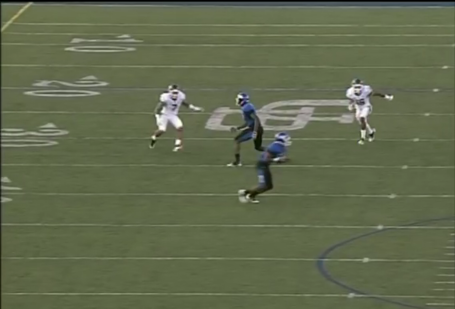 1:03...thrown to Jackson, who throws to Oliver...A) pass interference not called...B) Jackson had soooo much running room,(see above) he might have scored a TD if it wasn't a trick play.

End of the 1st Quarter.

Happy Friday, and check back next week for UConn at Buffalo 2nd Quarter.