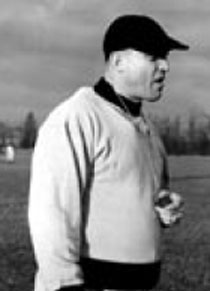 Jim Peele won two Big-10 Championships as Quarterback of Purdue and also played baseball for the Boilermakers. After his playing career, Peele signed on as an assistant for the Bulls Football team. In his two years under George Van Bibber, UB only won four games. In 1936 Peele took the head coaching job, and immediately equaled his predecessors win total.

Peele's Bulls finished 5-3, and in his second season missed matching that record by the narrowest of margins. During the conclusion of the final game of 1937 UB, up by six, fumbled. Rensselaer recovered and scored the game winning touchdown in the last minute of the game.

Peele's first two seasons displayed his teams ability to jump out of the gate, starting 4-1 in each, however the finishes left plenty to be desired, 1-6 in the final seven games of '36 and '37. Hot starts and cold finishes defined the '36 and '37 seasons, the Rensselaer game and it seemed to describe Peele. After starting his coaching career 9-7, his teams would finish 8-22-1 over the next four seasons. The low point was 1939, UB went 0-7, only managing to score seven points the entire season.

Jim Peele was 1-5 all time against Alfred entering the 1946 matchup. The win came during Peele's first season, the final season for Alfred coach John Cox. In 1937, Alfred hired Peele's Purdue teammate, Alex Yunevich. Yunevich proceeded to own Peele and the Bulls, winning 5 straight games. UB hadn't scored a single point against Yunevich's Saxons since 1937, his first year as coach.

Alfred jumped to an early lead in the game, but Lou Corriere sparked UB to a halftime lead they would never relinquish. The win moved UB to 5-2 on the season and clinched the first back-to-back winning seasons for UB since 1899. Coach Peele's first victory over Alex Yunevich was also the twenty-eighth win of his coaching career.

In the 1946 finale, the 6-2 Bulls hosted Johns Hopkins. Lockport Lou Corriere sparked the Bulls with a eighty-yard punt return touchdown in the first quarter. He also added a thirty-yard touchdown pass in the 3rd quarter. Paul Missana ran for a touchdown, Eddie Mittlesteadt exploded for a seventy-two yard TD run and Vic Manz hit Len Serfustilli for a thirty-two yard TD pass. The defense dominant all day also got on the scoreboard, knocking Hopkins QB Jack Adams out of the end zone for a safety.

Coach Peele became the winningest coach in UB history on November 2nd 1940 with a win over City College of NY, a distinction he would hold for twenty-two years. On October 16, 1942 UB defeated Hartwick and Peele became the first UB coach to win twenty games. Today only three other coaches have matched that feat. Four years later, Peele's Bulls crushed Johns Hopkins, making him the first of three UB coaches with thirty ecareer victories.