Share All sharing options for: Three Goats - The BGSU Game

The premise is simple: when we win, I praise our heroes, when we lose I criticize our goats. Take any praise in stride, lest we get a big head. Take any criticism with a grain of salt, this is how we learn.

It has been 30 full days since I've had to write a Three Goats article, and for that I'm grateful but I really wish we could have ended the season on a 4 game winning streak. On to the goats.

I feel bad for this one, because he had 2 interceptions and ends the season #1 in the MAC with 5 interceptions on the season. I am a huge Najja fan, and if he adds some run defense (tackling) to his game, he might be NFL ready.

That said, what were you doing NJ? The biggest play of the game was the Shaun Joplin touchdown pass at the end of the first half. Najja was in perfect position on the play: 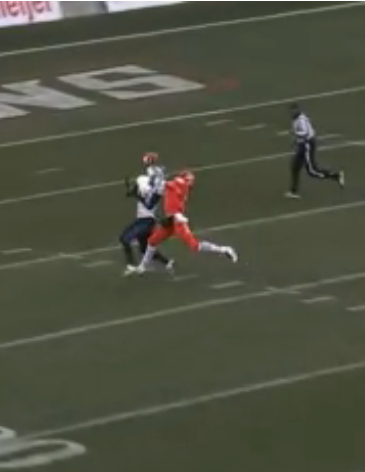 Neither player jumped, it seems Najja slowed down in preparation to catch the ball at his chest. Unfortunately for us all, Joplin lunged at the ball and caught it first.

Maybe it was wind, maybe it looked like it would go long and at the last second the ball lost altitude and came down in front of the Bowling Green receiver... 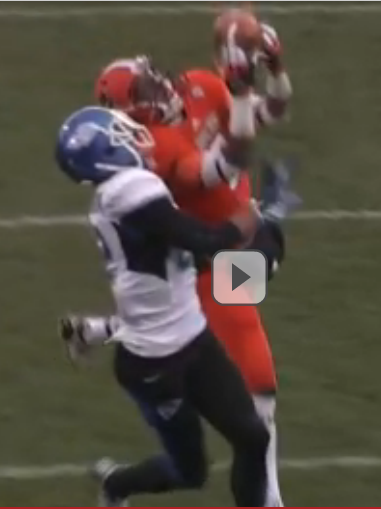 How many people will try to play this image?

Rule #1 of playing the ball in the air is to "highpoint" the ball, that is to play the ball at the highest possible point. Najja waited for it to come to him, if he jumped, it would have been intercepted, knocked down, maybe pass interference on either player, but it would not have been a catastrophic touchdown reception.

2) Have I mentioned Lou Tepper yet?

We had seven games with 3 or more sacks this year, including a 8 sack performance last week against UMass. In our other five games, we had 2 combined sacks. How can you be so incredibly inconsistent and expect to win?

I know what you're thinking, was it scheme, or did those teams just have really good offensive lines?

It was scheme. Out of those 5 teams, only NIU and BGSU were in the top 50% of the country in sacks allowed. In all those 5 teams gave up an average of 21 sacks on the season, and 2 sacks per game.

Tepper not finding a way for Means, Mack, Pettigrew and Way to get to the BGSU QB hurt our chance at winning the game.

It's a microcosm of the extreme inconsistency during Quinn's tenure...remember the trick plays from the first half, where were they in the 2nd half? Remember no fullbacks? Has this guy figured out what he wants to do yet? (or is he just progressing?) Well, with a injured Murie, and with Campbell and Oliver hobbled, why not go to Rashad Jean? The big man carried a heavy load last week while Buffalo clawed back into the game. This week, no carries. In the meantime Buffalo ran 21 times for 62 yards while throwing 30 times with 8 Licata "runs" for -33 yards. This marked only the third time this year that UB passed more than they ran: UB was 0-3 in those games, outscored 86-16.

1b) Points off turnovers

Our 7 points scored came as a result of a Colby Way interception setting up the offense on the 19-yard line. It was our 16th and final turnover forced on the year, but only the 5th time we turned a turnover into points. We forced 16 turnovers and turned it into 31 points.

If you remove the Lester INT TD and the 3 times we took knees after forcing a turnover, we forced 12 turnovers that the offense turned into 24 points. Part of the reason for this, is the average drive start after a turnover is the UB 35 yard line. This is a bad job by Tepper, when you bend but don't break, you still slant the field against you, but it is ultimately an indictment of Quinn who only seized the momentum of a turnover 25% of the time.

Down 7-0, Buffalo gets the ball on the 44. A Devin Campbell reception for 9 yards and a Campbell run for 10 yards takes us down to the Bowling Green 37. We then pass on first and second down, in which we gain -7 yards. On 3rd and 17, we conservatively run the ball, but actually gain 14 yards to the 30 yard line. Now it's fairly windy for a 47-yard kick so maybe you don't put it on Clarke's foot, but you have to do something better.

We seemed to run the fake tunnel screen play that worked really well in the 2011 opener, only to be dropped by Ed Young. It worked again today the BGSU DB's reacted to Neutz, and Devon Hughes was open. The only problem, on 4th and short, BGSU brought pressure, and this was a long developing route. It was flawed by design, both outside wide receivers ran dummy routes with no chance of getting the ball. If we run that play with 2 or 3 wideouts instead of 4 we just might have the protection to convert and even get six on the play. As UB rarely saw BGSU's side of the field on offense, this was a silly wasted opportunity.