Talking Bull: Somebody by the Sentinel Tribune an atlas!

Share All sharing options for: Talking Bull: Somebody by the Sentinel Tribune an atlas! 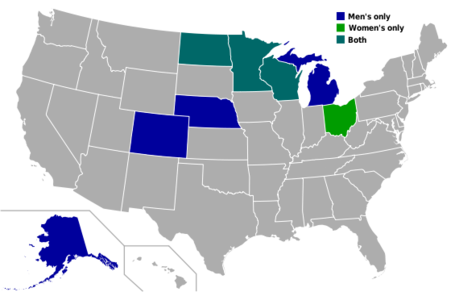 Do you see this map? This is a map of the states involved in the WHCA. The WHCA, for those of you who are unaware, is one of the hockey conference trying to find its place in the brave new world of NCAA hockey.

The league was founded under the banner of "The Midwest Collegiate Hockey League (MCHL)" in 1951 and stretches from Michigan to Alaska (with some Womens teams in Ohio).

So why is this map important? Well it's a big part of the reason that Bowling Green is trying to bring in fresh blood to keep the CCHA alive. There are pundits out there who think that the mission to create a "Zombie CCHA" (Their words) will harm Bowling Green more than it will help them.

The Sentinel Tribune makes some cogent arguments in their hit piece but then they toss in this lemon:

(Updated 9 p.m.) Hockey Talk: BG should join WCHA (9-29-11) - Sentinel-Tribune: Location and travel costs would be an issue if the Falcons join the WCHA, but travel to the Atlantic Hockey schools isn’t easy, either. -- Kevin Gordon

Umm... Kevin. Take this from someone who lives in the Twin Cities and drives once a year to Western New York. I would much rather be in a conference that spans from Western Ohio to Western New York than one where their is only a single drivable school.

While this is still all rampant speculation the core of the new CCHA would look a bit like this:


View NorthCoastConference in a larger map

There is not a single school on this map that Bowling Green would have to fly to. The trip to Pitt might be a bit much for a drive, maybe. This map also includes RIT which has expresses little interest, but if Hockey East does not come through and this new CCHA takes form they might reconsider. To be sure someone might jump in that stretches this map a bit (Alabama for example) but Bowling Green would be in a conference with one or two schools our of driving range instead of in one with one or two schools *in* driving range.

Why is this important? Well Bowling Green has had a lot of trouble funding it's hockey program. Like many mid majors its getting squeezed pretty tightly. UB Spends, on average, several million more per year on sports than Bowling Green and even it is looking for a donor to help kick start a team.

Aside from the perceptions of the geographically challenged there are other obstacles to overcome. The Buffalo news reported that Jeremy Jacobs has said he does not intend to fund the startup costs of UB's Hockey Program. I guess we can put the tribute uniforms on hold:

Delaware North Cos. Chairman Jeremy Jacobs, also known as the owner of the Stanley Cup-winning Boston Bruins, refuted reports that he would be willing to fund UB's climb into D-I hockey the way Sabres owner Terry Pegula did last year with Penn State. Pegula dropped $88 million for men's and women's programs and a new arena. "There's no truth to the rumors," Jacobs said through a spokeswoman.

Gleason does take the time to point out that the talent pool, the chance for local rivals, and the culture in Buffalo make Division One Hockey a no brainer.

Bulls Hope to Shock Volunteers - Sports - The Spectrum - University at Buffalo
Head coach Jeff Quinn said his players are not intimidated and they aren't changing their pre-game routine. Still, the Bulls are making some modifications in order to be prepared for the 105,000 fans that pack Neyland Stadium every week.

Scouting Tennessee - Sports - The Spectrum - University at Buffalo
The Bulls do have a strong defense, but that ‘D' can only do so much against such an offensive powerhouse. Buffalo can win if it can hold up against Tennessee in a shootout. Unfortunately for the Bulls, the offense has been inconsistent thus far, and I'm not sure if it will show up on Saturday. The 100,000 raucous faithful fans at Neyland Stadium don't help much either. Buffalo will put up a fight, but expect Bray and the Volunteers to thrive.

Buffalo.com - Buffalo entertainment, food, events, sports and style
Despite losses to two Big East schools, the University at Buffalo Bulls have been surprisingly competitive, lurking around against Pittsburgh and UConn until late in the game, worrying high-major opponents. An SEC foe, however, is a different beast, as the Southeastern Conference has produced the last five National Champions, with only one team repeating (Florida ‘06, ‘08).