Share All sharing options for: UConn vs UB Game Thoughts 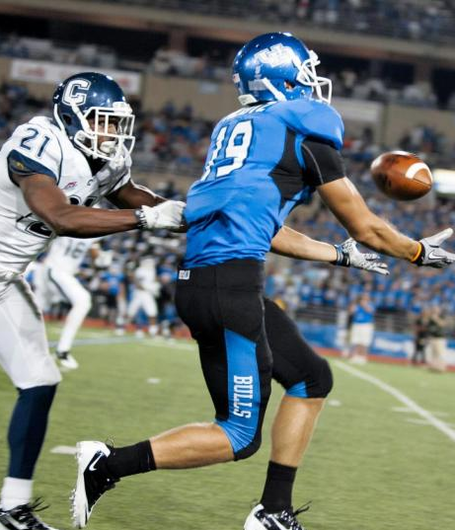 Another week gone by where us UB fans feel like we played well enough to win. I'd go even further and say that there is no reason why we couldn't have won this game. The performance by our offense was too much like last year. Something is different this year though, compared to last. This time last year, we were in a pretty similar situation, but instead of being 1-3 and 0-0 in MAC play, we are 1-3 with an 0-1 record in MAC play. Last year, at this time, we went to Bowling Green, and then played the gauntlet of NIU, Temple and Miami. This year, traveling to Tennessee is the new Bowling Green. After Tennessee we have Ohio, Temple, NIU and Miami. That is one reason why this loss hurts more than it should. A game that is extremely winnable like this, has to be won if we want any shot at a bowl. Anyway, on to the game thoughts..

-The play of our defense in general, but more specifically our front seven. This is the front seven that we expected to see come week 1. I think we were missing some of this versus Ball State, and PITT. Yeah, Mack has been playing amazing but everybody played outstanding yesterday. Fred Branch, Gordon Dubois, Lee Skinner, Richie Smith and Willie Moseley all had great games. They need to play like this the rest of the season if we want to stay competitive.

-Punting. Our punting has been outstanding this year, and it stayed that way last night. Schum has been doing a great job, and it's obvious he put in a lot of work in the offseason. Our coverage was good too, except that one punt where Striggles stopped the ball, while he was touching the end zone. You gotta make that play, and pin them at the one.

-I liked our jerseys. They didn't disappoint

-Unfortunately, there are a lot more bad things then good things from this game. I'll start with the most obvious one first, and that is the play of the offense. Wow. Just wow. Talk about shades of last year. Sure, we didn't turn the ball over a lot, but when we did, we made sure to really make it count. That interception at the 5 yard line is unacceptable from a guy like Chazz. Here is a guy who is here to make all the smart plays. That, Chazz, was not a smart play. I could go on for awhile about the offense, but there's no point. We all know they sucked.

-How about our screen passes? How many did we run, like 6 or 7? How many worked for us, uhm try zero. These were some of the worst screen play attempts I've seen in a while. The first problem is Oliver doesn't sell it enough. He is way too quick off the ball. Second, he is so short that he gets lost behind all the lineman. He has to literally be wide open in the flats in order for the screen to work, otherwise Chazz can't even see Bo.

-Missed throws. This is the worst we have seen Chazz as a UB Bull. I can remember more than 3 passes that Chazz just flat out missed, all for first downs. The biggest of which came near the goaline, when Chazz missed Gordon, in what could have been a touchdown. Some could argue that Gordon could have caught that, but for a blocking tight end, that throw has to be better. What happens the next play? The Chazz pick.

-Peter Fardon with chip shot missed field goal. We could have been up 6-0, and maybe with a little more momentum.

-The last three minutes of the 1st half. You can't give up ten points in that time frame. Giving up that field goal, OK. You get the ball back and do what with it? Throw it deep on a 3rd and short, stop the clock, and give UConn plenty of time with the ball. They go on a 80 yard drive in 4 plays or so, and the game is now 10-3 at half. Completely different ball game. This hurt.

-Okoye Houston personal foul on the kickoff after we kicked our field goal. Giving UConn an extra 15 yards was all they needed to get going, and get on the board with a field goal. If Houston doesn't commit that foul, UConn isn't in field goal range, and we are still up 3-0.

-Injuries. I hope everybody is alright. Guys like Striggles, Baugh, Means and Copeland were all shaken up. Adding insult to the injury.

-OLine. Dont need to say much here. When Chazz had time, he missed a lot of throws. Other then that, Chazz was running for his life.