This is one of four brackets in a summer long feature on the history of UB Athletics. First all the the candidates will be introduced and ranked. After the entire bracket is assembled a series of polls will help us pick the best teams to ever represent UB.

Some acknowledgment to the fine folks at UBFan who offered some suggestions in putting this bracket together. 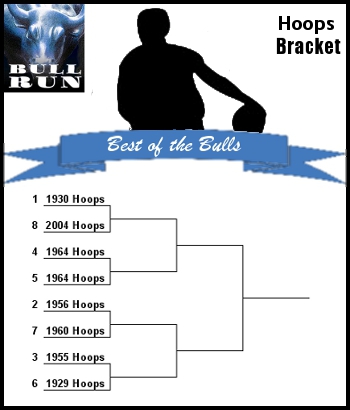 Coached by Buffalo Athletics cornerstone, Art Powell, finished 15-0, captained by Bob Harrington, a member of the University’s Athletic Hall of Fame. It is the only undefeated team in school history, but its a team that hearkens back to the days when UB was a small private school so some of the opponents might not be names you recognise.

Powell was, as you may know, called on to reboot the athletics departments after it shut down early in the century. In 1915 UB brought in the Syracuse alumni to coach both the basketball. He also replaced Coach Peasant in 1916.

After limited success in football the department allowed Powell to focus on just hoops in 1922. Between the 1922 sand 1932 seasons Powell's teams had just one losing season.

The 2004 Bulls are arguably the best team of the modern era. The team won a school-record 23 games, made it to the MAC championship game and earned a berth in the NIT (first postseason appearance as a Division I program). The Bulls defeated Drexel in the opening round before falling to eventual runner-up Saint Joseph’s.

Turner Battle was named MAC Player of the Year and earned All-America honors.

Were it not for an awful second half during the MAC Championship game this team would have made it to the NCAA tournament.