Talking Bull: MAC Expansion, it could be worse..

Share All sharing options for: Talking Bull: MAC Expansion, it could be worse.. 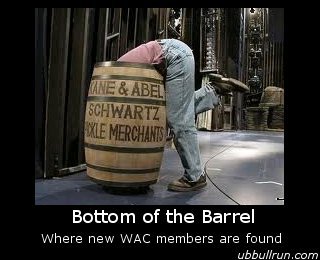 I know many were bummed out that the MAC took on another football only member but at least it was a large flagship that had been considering a move up for some time.

The MAC's last move does not stink of respiration, merely a strategic expansion into a new market the only way they could. Now the WAC, fighting for its life is inviting anyone, and we mean anyone, to join..

Big Sky Gets Catty With WAC Attack Brush-Offs - From Our Editors - SBNation.com

Who's not impressed with the WAC's new tactic of holding off conference collapse by sheer force of numbers (we're assuming they're counting each of their new hatchling schools as approximately two-thirds of one program)? Division I-AA's own Big Sky Conference, whose member schools have reportedly rejected at least half a dozen come-ons from the flailing marauders of the West. And the conference commish wants to make sure everybody knows, in uncanny junior high locker room fashion, that it's not because Big Sky teams couldn't hack it in the mid-majors:

Speaking of the newest MAC member they are finding that life as a mid major program means having to settle for two for ones with their soon to be instate rival.

In ACC, BC hasn’t been out of its league - The Boston Globe
With the University of Massachusetts moving to the FBS level, DeFilippo has offered it two-for-one deals over a six-year period, meaning the Eagles would host UMass four times and play twice on the road (which would be at Gillette Stadium).

But don't let that get you down UMass fans, join us in a time honored MAC tradition. The feast of Ohio State comeuppance. OSU has turned into the ultimate train-wreck this season.

Ohio State To Hire Detectives To Be Beaten Up By Football Players - From Our Editors - SBNation.com

It is a terrible sign for your personal situation in any sense if you require the services of a private investigator. This is true no matter what situation we are talking about, because hiring a PI means you are in trouble, especially if you are a beautiful but doomed woman with a haunted past and gams that won't quit. Dames like that need detectives like kangaroos need purses, kid.*

And this is a two-fer It seems there is some interest in the Way OSU (and some others) are pulling talent out of South Florida.

Dave Hyde | Sun Sentinel blogs | Hyde5: NCAA in South Florida investigating recruiting
NCAA investigators are coming to South Florida this week to look into the recruiting of several high-school football stars and the methods of several colleges in doing so, according to a source. Among the schools whose recruits are in question: Ohio State, Louisiana State, Auburn and Tennessee.