Share All sharing options for: Grading The Class: Defensive Line

We are living in a "do more with less" world so its not hard to imagine how coach "Jappy" Oliver felt last season. When he arrived at UB he was asked to take an anemic defensive line and making it key to UB's defensive efforts in 2010. Oh yea he had a bunch of quick guys recruited for a 4 man front who now had to run a 3-4. Oh, and some of his depth was taken away to add to the dangerously thin offensive line.

Coach Oliver lived up to his reputation as a great developer, if not recruiter, of talent. The front three UB put up was nowhere near the best line of the modern Era (That line was anchored by Trevor Scott) but it was miles ahead of the performance that the unit put in during Turner Gills farewell season.

The worry was the size of the line. Some of our linebackers rivaled our defensive ends and our nose tackle was tiny for the position. Coach Inge helped the cause by going with a hybrid defense but the guys in the trenches deserve a lot of credit. UB did take quite a few beatings throughout the season but many games were winnable because of happened in the defensive box.

While you want to tip your hats to the guys playing line the fact is that we lost some key guys to graduation and there is still the matter of size in the center.

So did Coach Quinn get it done on the d-line?

While not as bad as the needs on the offensive line UB could definitely use more beef in the trenches. Some of the guys on the depth chart right now could make excellent middle linebackers or hybrid 'elephant backs'.

The Bulls also have an awful huge number of Juniors and Seniors on this years squad so, for the sake of the future, there had to be a pretty decent sized squad of Linemen coming in.. 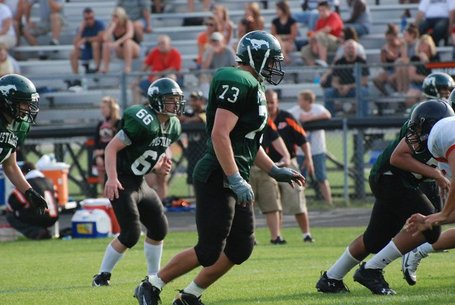 Felicia is not the answer to UB's size issue, yet. at 6'3 he has a frame that can support more weight but he is coming in at under 240 pounds (or was over the summer). What he does bring to the line is impressive quickness and a pretty solid tendency to keep blockers off of him.

ESPN Rates him pretty highly, 73, mainly because of his raw physical talent. Coach Oliver and Duval both have some real work to do with Felicia to bring out what can potentially be one of the better ends that the Bulls have seen in the past decade.

He was a First-team All-State selection and his school’s all-time sack leader…three-time letter winner and two-year captain for the Mustangs. During the season he recorded 11 sacks, 48 tackles and 15 tackles for loss as he helped the earning the Iron Man Award. 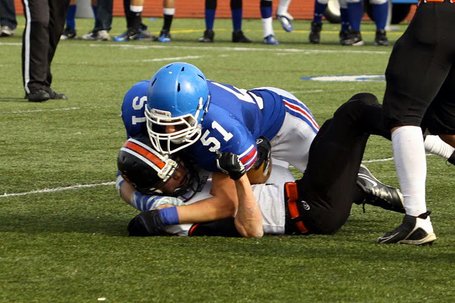 This is another 'undersized' prospect with a huge upside. Tammaro has great pursuit and is a fundamentally a very solid tackler.  At 225 Tammaro is a good size of a linebacker but that might be a waste of his talents.

Ideally you want to see Tammaro put on 20 pounds while maintaining the speed he has to add some depth on the line.

Tamaro was first team all state and the 23rd rated player in Michigan (By ESPN) He was also selected for All-Detroit Metro and All-County after recording 58 tackles, 5.5 sacks, two forced fumbles and three pass breakups in his senior season..

(Update: I had to go back through UB's recruiting day releases to see that Tammaro is listed as a linebacker) 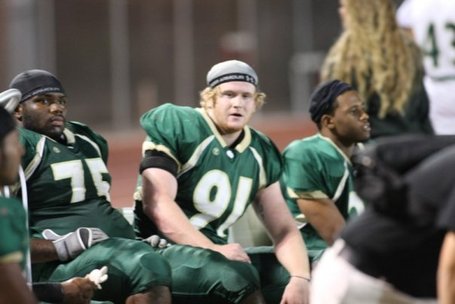 Cahill who attended Corona Del Sol High School in Tempe had committed to Army.  After Attending the United States Military

Academy Preparatory School in Monmouth he elected not to attend Army but decided, instead, to forgo that offer.

Cahill is already enrolled and will have the benefit of getting into Duval's conditioning program and getting to work with Oliver.

At 265 Cahill is one of the bigger linemen, which along with the extra time he has over the other incoming recruits’ means that if any of the incoming recruits sees the field there is a good chance that Cahill is going to be among them.. 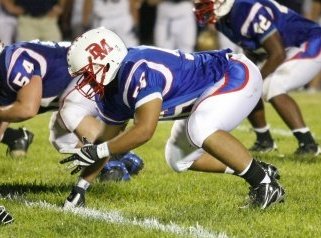 This was the highlight signing of this year’s class. Maybe the host highly rated recruit ever to sign on with UB. He was an absolutely Dominating defensive lineman who was ranked as the second best defensive tackle and the 14th best overall player in state of Maryland by Rivals.

He passed up Offers from the likes of South Florida, Wisconsin, Michigan State, NC State, and Ohio to come play at UB. This was a player who Quinn went hard after, even watching a Bowl game with the young man on the evening he made up his mind.

This is the kind of Bulk UB Needed on the line, 285 with a little room to grow screams interior line. Scouts saw several minor issues with his mechanics on the pass rush (pad level, separation) but most see nothing but positives in his ability to stuff the run.

He is big, aggressive, and is a great tackler and despite any 'issues' noticed by scouts he still managed to record 13 sacks his senior season. .

A part of me really wants to give the class a B because we lost Patrick Williams to Villinova but the additions of Cahill and Patterson could easily start paying dividends this coming season. With a three four defense what more do you really need than two solid guys and two guys who need only a little bulk.

Patterson will already be one of the bigger guys on the roster by summer camp. He was 285 on signing day and I suspect, if he is being tapped as the nose tackle of the future, he will be in the orbit of 300 by the time UB is camping this summer.

Cahlill will be fighting for a spot on the depth chart in a few weeks when spring ball kicks off. At his size he might be able to find a role on the end. I don't know if he comes out of spring as a first team player but he should be no deeper than second team.

Tammaro needs some mass, other than that he is solid. if K-Pat and Cahill pan out on the line he may be asked to play that fourth linebacker spot on the strong side as a sudo lineman. Unless he really bulks up a lot, or gets moved to linebacker, I don't think he will start the season very high up on the depth chart.

Tammaro is a future player. All the tools are there but the depth chart is a little cluttered on the line for a 225 pound guy to find his way in. He may need a season to get to himself up into the 260-280 range but he should be able to add that weight.

Felicia is in the same boat. Good athlete, solid tackler, but too small to really break through this season. Then Again Steven Means is all of 236 and has been amazing on the line. All of UB's defensive linemen are either three star guys or very close to it. Easily this is the best unit of the class.