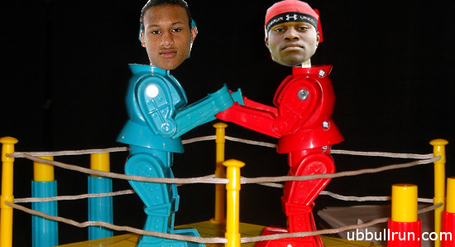 Virginia Football Players Put Dukes Up, Get Suspended For Fight - From Our Editors - SBNation.com
Redshirt sophomore linebacker Ausar Walcott, sophomore cornerback Devin Wallace and sophomore center Mike Price each face three misdemeanor charges of assault and battery by mob and one felony charge of burglary-entering a dwelling with the intent to commit an assault. The charges stem from an incident that occured Jan. 30. The three players were arrested Tuesday.

Wisconsin Valorously Agrees To Rematch With TCU, At Wisconsin - From Our Editors - SBNation.com
So a "third party" (cough cough ESPN cough cough) approached Wisconsin and TCU about an opportunity for a rematch after the Horned Frogs defeated Wisconsin in the Rose Bowl several weeks ago. Badgers head coach Bret Bielema let us all know that he was courageous enough to take on the challenge.

Tate Forcier Transfers To Miami After One Visit, According To Reports - SBNation.com
Tate Forcier enjoyed his Wednesday visit to the Miami Hurricanes so much that he’s already signed papers to transfer to South Beach, according to Bruce Feldman. After seeing campus, Forcier described his experience to Joe Schad in the most QB FORCE of terms.

Spring QB competition: MAC - College Football Nation Blog - ESPN
Buffalo: The Bulls did plenty of quarterback shuffling last season under first-year coach Jeff Quinn, but nobody seemed to stick as the starter. So the competition is open once again headed into the spring between Jerry Davis, Alex Zordich and Alex Dennison. Davis will be a junior, while Zordich and Dennison will be sophomores. Davis started the majority of games last season, but Zordich did start a handful as a true freshmen. Neither put up stellar stats as they tried to learn the spread offense.

Women's Soccer to Face WNY Flash in Exhibition Match - Buffalo Athletics
The Buffalo women's soccer team has announced that it will face the Western New York Flash of the Women's Professional Soccer League in an exhibition match March 8 at Sahlen's Sports Park in Elma, NY.

Buffalo Signs a Pair of Rowers - Buffalo Athletics
The University at Buffalo rowing team has signed a pair of rowers to National Letters of Intent head coach Rudy Weiler has announced. Alyssa Gabel and Emily Glasgow will join the Bulls beginning next season.

Bulls Earn First MAC Win, Top Eastern Michigan 20-12 - Buffalo Athletics
Spurred on by five straight wins in the first half of the match, the Buffalo wrestling team broke in to the Mid American Conference win column Wednesday evening with a 20-12 win over Eastern Michigan at Alumni Arena.

The MAC Basketball Freshman of The Year Might Surprise You - Hustle Belt
Coming into the season, Conventional Wisdsom felt that Central Michigan's Trey Zeigler, the super recruit who could've gone to Michigan or Michigan State, might not just be the best freshman in the MAC, but the best MAC player period. The inverse maybe the case. He's obviously not the best MACthlete (yet), but it's not even a foregone conclusion that he's the best freshman.

And speaking of Javon McCrea: