Share All sharing options for: Buffalo verbal switches to Toledo 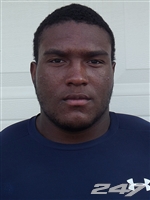 via our friends at 247 sports

According to the twittervers AD Bolden, a 307 pound lineman from Middlebrook High School has decommited from Buffalo and given a verbal to Toledo.

He was so far the only offensive lineman who has publicly given a verbal commitment to coach Quinn this season leaving the Bulls with no currently committed linemen for this seasons class.