Share All sharing options for: 6 days to kickoff: Collin Michael

Redshirt-Freshman: (2013): Saw his first game action in the game against Miami.

Redshirt-Sophomore (2014): Played against Norfolk State, attempted his first career pass, but could not connect with Malcolm Robinson.

Outlook: Not expected to play this year, but will be one of 3 returning QBs next year, so Michael has a year to impress the coaching staff in anticipation of that QB battle.

Both teams moved the ball with ease, and Temple looked to be superior, yet after a UB goal line stand and an Alex Pierre forced fumble on a kickoff, UB had the ball on the 38 in position to break the 14-14 tie before the end of the half. UB had scored on a Brandon Thermilus run and a Drew Willy to Ernest Jackson TD pass, tried the aerial route again, but Willy was sacked and fumbled giving the ball back to Temple with 32 seconds remaining in the half. Instead of taking a knee, Temple drove 59 yards in 3 plays and scored a TD to take a 21-14 lead into halftime. 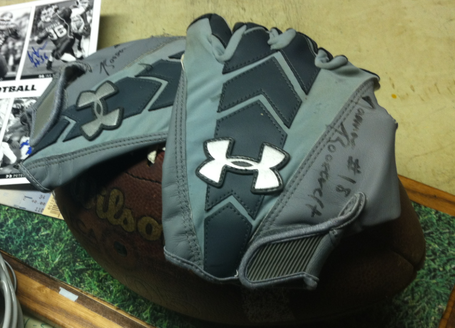 Buffalo forced a Temple 3-and-out and scored on their first drive with a Willy to Hamlin TD pass to tied the game again at 21. After forcing another Temple punt, UB drove down to the 7 yard line, but Drew Willy was intercepted at the 3. On the next UB drive, UB was stoned on 4th and 1 at the 36. Temple finally got some offensive rhythm back, and moved close enough to attempt a field goal, but it was missed. On the following drive, UB was unable to score a TD from 1st and goal at the 9, but they were able to take their first lead of the game with an A.J. Principe field goal.

UB's defense held Temple's offense to 53 yards on 19 plays in the 2nd half, and a stop with 2:22 remaining would seal a UB win. Temple started their drive with a 30 yard pass completion. Later on 4th and 2, QB Adam DiMichele scrambled for 12-yards to convert. With 38 seconds remaining, Temple threw an 11 yard TD pass to take a 4-point lead, 28-24.

UB's final attempt was aided by a kick out of bounds, and and a defensive holding call that put UB on the 50. Willy found Naaman Roosevelt for a 20 yard pass to put UB at the 30. Willy found Gary Rice at the 19 yard line, but an illegal motion penalty send the Bulls back to the 35 with time left for only one play. Drew Willy rolled out and threw a jump ball hail mary, a Temple defender bowled over Brett Hamlin and 2 other Temple defenders inadvertently creating a clear catching lane for Naaman Roosevelt who hung on to the game winning TD as the student section poured on to the field to celebrate.

The play know simply as "the catch" and the win over Temple proved significant as UB ran to the MAC East title. The play stands out along with "the fumble" and "Khalil Mack's Horseshoe Pick-six" as one of the most memorable plays in UB's FBS history.