10 days to kickoff: Gandolf Lester says WMU shall not pass

Share All sharing options for: 10 days to kickoff: Gandolf Lester says WMU shall not pass

But Panther or no Panther freshmen don't get love on this year's countdown.

Joe Licata was 1-0 as a starter after a riveting win over Miami and he started strong against WMU. In their first scoring drive, Alex Neutz caught 2 balls for 36 yards and Branden Oliver ran 3 times for 29 yards including an 18-yard TD run for the games first points. 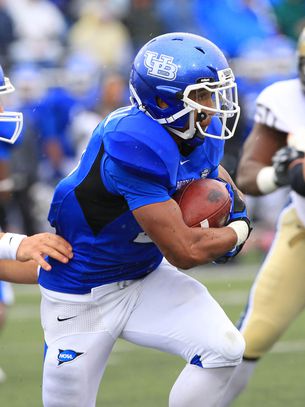 The Postgame Meal: All predictions come true, except the WMU winning part.

WMU's attempts to close the score were thwarted, first by a Lester interception in the end zone and later by a missed 46 yard field goal attempt. After a missed field goal by Patrick Clarke, UB's defesne forced a three-and-out to set up the Bulls on the 45. Devin Campbell broke free on the first play of the drive for a 45-yard TD run to give UB a 14-0 lead. With 4 minutes remaining, UB kicked a field goal to take a 17-0 lead.

Fourteen plays later, WMU scored two TDs to turn a laugher into a too close for comfort 17-14 halftime lead. Seven Plays later, WMU was up 21-17. The Broncos scored 1 point per play (offense and defense). UB stopped the bleeding with another Patrick Clarke field goal and on the next play, Cortney Lester intercepted Alex Carder for the second time. UB converted the turnover into another Clarke field goal and regained the lead at 23-21.

Following a WMU field goal, Alex Neutz caught a 30-yard pass for a TD and a 29-24 UB lead. With 10 minutes remaining, UB's defense stepped up to finish off the game. Willie Moseley intercepted Alex Carder's first attempt to take the lead. On their next attempt, Jake Stockman strip sacked Carder. With 83 seconds remaining, and 90 yards away from the game winning touchdown, Cortney Lester grabbed his third interception of the game sealing the UB win.