This is going to be an abbreviated Volleyball Roundup, because I'm running behind this week.

Happily, UB continues to look better and better in the court. After winning two consecutive tournaments, the Bulls headed to Bloomington, IN this past weekend for their toughest tournament yet. Facing opponents from the Big East (Butler) and Big Ten (Indiana), as well as a rematch from the previous weekend against Western Illinois.

The Bulls went 2-1 in the tournament, defeating Western Illinois and Butler both 3-1 on Saturday after falling 3-1 to Indiana on Friday afternoon. When UB, Indiana, and Butler all finished the tournament tied at 2-1 in the round robin, Indiana claimed the championship on a 'sets lost' tiebreaker. I am not aware of any all-tournament team being named, but Tahleia Bishop was her usual self, with 44 kills in the two Saturday matches alone, and Cassie Shado played well as she continues to get more time.

On Tuesday, Buffalo returned home to play at Alumni Arena for the first time since late August and took on the Niagara Purple Eagles. To put it simply, it was a bit of a walkover,as UB took the match in just three sets. Even more impressively, between a strong opening for Niagara that gave them a 16-11 lead in the first set and a run made the third set look close at 25-21, UB won 54 of 88 possible points.

Follow the first link for a more in-depth write up and stats from this one:

UB Volleyball Sweeps Niagara to Cap Nonconference Schedule - Bull Run
UB's first home match in September could not have gone better in the Bulls' final tune up before starting MAC play this weekend.

MAC play is just getting started this coming weekend, so without a keen familiarity with everyone's strength of schedule I can't say too much about UB's outlook, but at 10-4 they have for the second straight season the best nonconference record in the MAC. 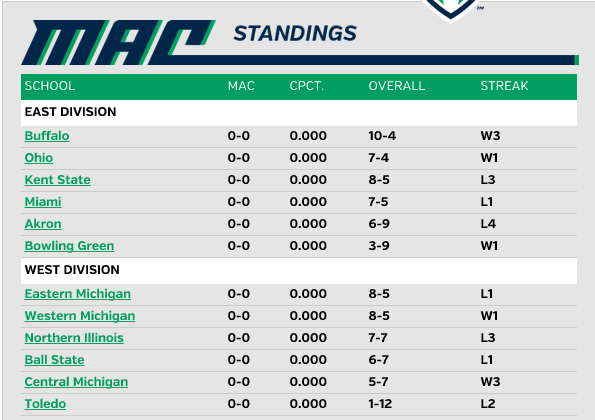 UB (MR 135) enjoys some more homecooking this weekend, hosting Bowling Green (MR 206) and Miami (MR 151) on Friday and Saturday, respectively. I will unfortunately be out of town and miss both matches in person, but hopefully I'll return to a 12-4 UB team. Go Bulls!