UB returned home after three straight weekends on the road, only to show how much they had grown during their 7-2 road trip, easily dispatching Big Four rival Niagara in three sets.

If you had a really good memory to remember how the UB Volleyball team looked the last time they played in Alumni Arena and coupled that with a steadfast ignorance of their play on the road the last few weekends, I would bet you'd be pretty impressed by their performance last night against Niagara.

In their time away - can I call it a vision quest? - UB went 7-2, winning two tournaments, and only missing out on the third by tiebreaker. And they played pretty well in their own tournament way back at the end of August, going 2-2 with one of those matches coming against Ole Miss of the SEC, who had only three players below 5'11". Even so, the Bulls got markedly better, and healthier, and now wrap up their nonconference slate with a 10-4 record - the best in the MAC.

Last night, UB capped that tenth win with a three set sweep of the visiting Purple Eagles, during which the Bulls frequently outclassed their opponents from serve to point. Short of an early 16-11 lead in the first set that forced Reed Sunahara into a timeout, and a late 7-4 run to make things close in the third set against a sub-heavy UB lineup, Niagara couldn't do much at all.

Tahleia Bishop was once again the point of UB's attack, especially in closing the gap late in the first set and in the dominant 25-14 second. In the first, Bishop had just one point in the first half of the first set, but really found her groove after Sunahara's timeout woke UB up from an 11-16 deficit, scoring six of her seven first-set kills in a ten point stretch that gave UB a 23-21 lead before Megan Lipski finished off the set. 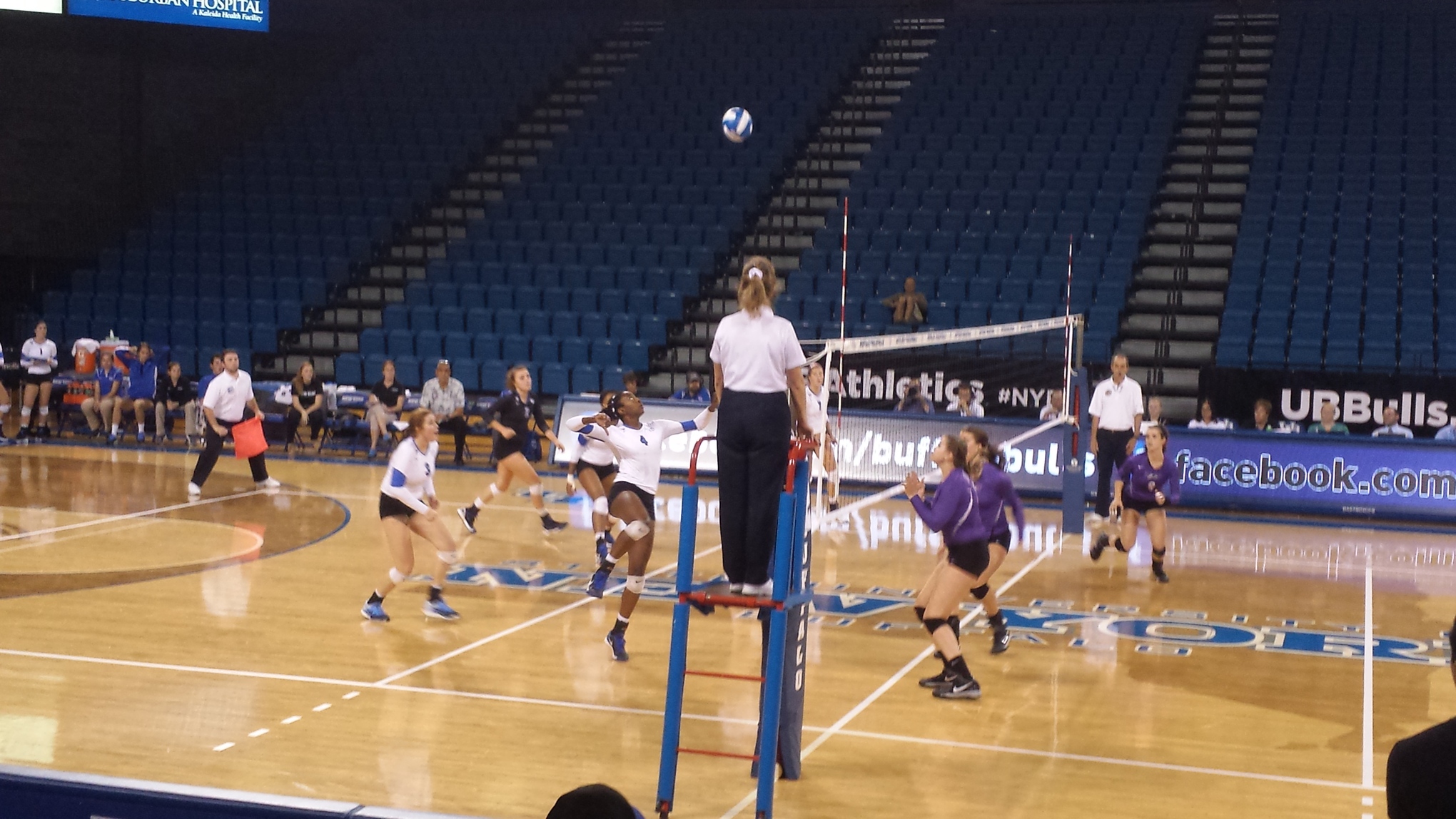 The second set went about as poorly as possible for the Purple Eagles, who committed nine errors while only managing 14 points in the whole set. UB, on the other hand, played nearly perfectly, needing just 26 attacks and committing only a single error on the way to a .432 hitting percentage. Marissa Prinzbach had nine assists on just 12 UB kills and added three blocks in the second set alone.

Niagara was able to put up more of a fight late in the third set as UB used the chance afforded by their lead to get some subs into the game. Even so, Amber Hatchett, a usual starter who didn't play in either of the first two sets, came in to start the final set and scored five of UB's first ten points on four kills and a block.

UB and Niagara enjoyed similar hitting percentages in this set, but most of Niagara's points came from Buffalo errors, while Niagara only managed eight kills of their own. Even with Hannah Varley, Skylar Day, and Danielle Marotto seeing their most extended time of the season, Niagara could only close to within two late before four points from Lipski and Bishop and an ace from Marissa Prinzbach finished things.

On the day, Bishop led the Bulls with 14 kills, while freshman Niki Bozinoski and Megan Lipski shared the team lead with nine digs apiece, and Akeila Lain had four blocks. For the entire match, UB hit .280. Even more valuable than the stats, however, was seeing UB's depth step in and play well. The only notable rotations were Cassie Shado flipping with Tessa Ooyama and Sable Staller sometimes with Megan Lin for front/back defense. Otherwise, Sunahara left most players in to play the full rotation, including Day and Varley in the third set, which is encouraging as we look ahead to MAC play.

UB next plays this Friday, once again at home, against Bowling Green at 7 PM. I won't be there, unfortunately, but Go Bulls!