The only time I have ever cried because of a sporting event.

The Buffalo Sabres were in their fifth season and this five-year old was mesmerized.  I would turn on the TV or radio for every game.  After my parents put me to sleep, I would listen to the third period on my clock radio.  I am sure my Dad knew I was listening to the game because the radio would magically be off in the morning when I woke up. 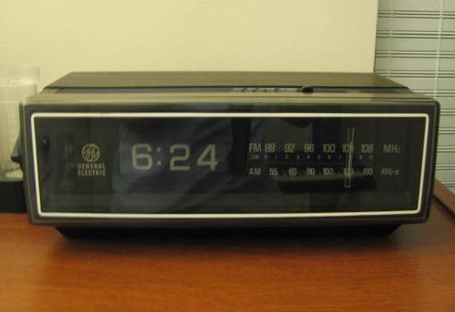 1975 was also the year of the first game that I went to.  I can remember it to this day like it was yesterday.  I came home from a grueling day of kindergarten, you know those blocks don't stack themselves!  When I walked in the door my Mom said that I am going to a hockey game and if I want to go I have to take a nap.  Sure, I was going to be able to sleep after hearing that news.  Taking a nap was like a punishment!  Could you imagine your boss coming to your office, "Bill, I got two tickets for you for the game tonight.  But if you want to go you have to take a nap in the conference room!"  What I would do now to take naps! 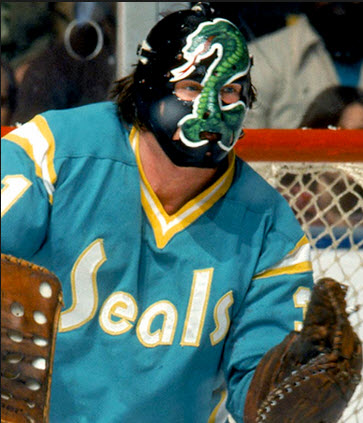 I remember the Sabres beat the California Golden Seals (and secretly thought their jerseys looked cool) but remember very little of the game.  I remember crowding outside to get into the building.  The amount or people was overwhelming but exciting.  I remember the tunnels to make our way up to our seats.  My little legs were exhausted as we passed the reds, then the blues, and eventually making out way to the world of Orange.  Then a panic attack ensued.  Getting to my seat felt like climbing Kilimanjaro.  Steepest set of stairs to this day I have ever encountered. Scary!  Finally got to my seats.  The place was huge and the ice looked white.  Not the gray I saw on the black and white TV!   I remember the chants.  1 - 2 - 3 we want 4. One fan would scream something and the arena would crack up. Now you have to listen to Cotton Eye Joe.  Also Milt Ellis and his booming voice.  Paging Dr. Barlow, Dr. Barlow, please call your office.  I would pay big money to have Milt Ellis leave my voice mail message if he was still alive.

The one memory that lasted with me the longest was not being able to breathe between periods as my Dad showed me around.  The smoke was incredible.  It looked like a scene from a movie where the fog is so thick you can cut it with your hands.  I was already hooked on the Sabres but now I am a full blown junkie.  My heroes - the French Connection: Rick had 52 goals, Rene had 40 goals and 60 assists, and I wanted to skate and look just like Gilbert.  I would go to practice and stick my butt up and out to try to skate like him.  Gilbert would literally leave me breathless when he had the puck.  He was a magician on ice to me.  Mess with the french connection and here comes the Jerry and Jim show.  I swear I looked for the bolts in the neck of Korab.  He reminded me of a slightly less stiff Frankenstein and scarred the heck out of me in a good way. 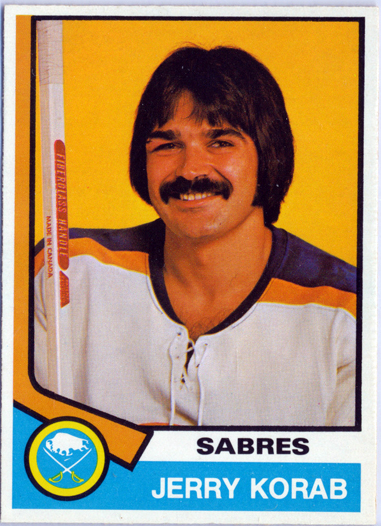 I am a five-year old kid who thought the world revolved around me.  This is my team so of course they are going to win the Stanley Cup. I went to a game, that makes it a sure bet.  The Sabres were in the Adams Division and the Prince of Wales conference.  Four players went to the All-Star game, Luce, Martin, Robert, and Korab.  Sabres were tied for most points in the league.  It is all coming together.  This team had two unbeaten stretches of ten games.  The Sabres also had the best tune ever written in We're Going to Win That Cup.  This thing is over!

Sabres beat the Blackhawks and people should just have listened to me.  I was telling everyone I knew, (bus driver, Bells supermarket check out lady, Twin Fair clerk, and so on) this was not going to be a contest.  Buffalo won in five and only one game, Chicago's lone victory in overtime, was close.

Than panic took over.  Buffalo is now against THE Montreal Canadiens.  To me the gold standard for a sports franchise.  Classy jersey, classy fans, history, and you can listen to games in both French and English.  Amazing what you think is cool at five years old.  I still remember my Faygo pop and grease popcorn.  Buffalo wins the first game in overtime and comes back and beats Montreal in the second game.  What was I worried about?  I get a little cocky and I brought bad karma to the Sabres.  Buffalo goes to Montreal and get blown out 7 - 0 and 8 - 2.  Why did I get cocky?  I promised I will never do that to hurt my team again.  Doom settles in.  Buffalo beat Montreal in overtime and closes out the series in Montreal.

Buffalo is in the Stanley Cup round.  Just like it was supposed to happen.  We beat the best franchise ever, bring on Philadelphia.  Remember how I vowed to not jinx my team?  Well I remember begging my Dad when the Sabres win the Cup can we please go to the parade.  I mean we already beat a team who tried to rough up the Sabres easily in the Blackhawks, the Cup, like it is supposed to, will be in Buffalo!

I'm from Buffalo, so you know how this is going to end.  Jim Lorentz lived on Grand Island and I remember seeing Jim walk through Tops maybe 5 - 8 years ago.  I remember I was still pissed at him for killing that bat.  I blamed him for cursing the team.  I refuse to ever date, like, or ever name any of my child Kate.  Heaven forbid a Kate ever looks to me for anything.  I do call BS.  Kate Smith sang God Bless America instead of the Star Spangled Banner and when she sang that song the Flyers always won (Like 93 - 3 but I refuse to look that up for accuracy.)  I remember her plumpness belting the tune away.

When I saw the team handshake the shock wore off and I could not control my tears.  I remember asking my Dad over and over "WHY?!"   I remember the look on his face was as sad as mine.  Living in Buffalo, as a Father, I do not have to be worried about being in that situation.  The fog game, the bat, Kate Smith, the real Stanley Cup in Buffalo and not belonging to ME.  It was too much for a wide eyed five-year old to handle.  I remember getting mad.  I said something stupid.  I remember telling my Dad before I drug myself and my blanket upstairs that I do not think I want to play hockey next year.

Someone should have shot a puck at Kate Smith!

Few things are worse than crushing the dreams of a five-year old. I know, I (Conrad) was five for Super Bowl XXV and let's just say there is a reason why the good guys always win in Disney movies. But was Dave's touching account of baptism into Buffalo disappointment worse than UB dropping football in 1971? Vote Below.

Up Next: Just because there were no flags, doesn't mean it was legal.