Each week leading up to the 2014 football season we'll be profiling current UB football players who are looking to "Make the Leap" or breakout this season. These can include any current UB players whether that be a backup coming into a starters role or a starter that is ready to elevate their game to the next level. Our first defensive prospect is defensive tackle Kristjan Sokoli

Football games are won and lost in the trenches; admittedly, the nose tackle position is not exactly the sexiest position on the gridiron, but it is one of the most physically demanding and important jobs on the defensive side of the ball. Defensive tackle Kristjan Sokoli really came into his own during his junior season, starting all 13 games while pitching in 29 tackles, 5 for loss, and 2.5 sacks.

Sokoli (6-5, 300) is a mammoth of a man and a physically imposing force when lining up as the 0-technique in Lou Tepper's defense. One thing Sokoli did consistently well during this past season was his hand placement, here is a shot from a play against Stony Brook: 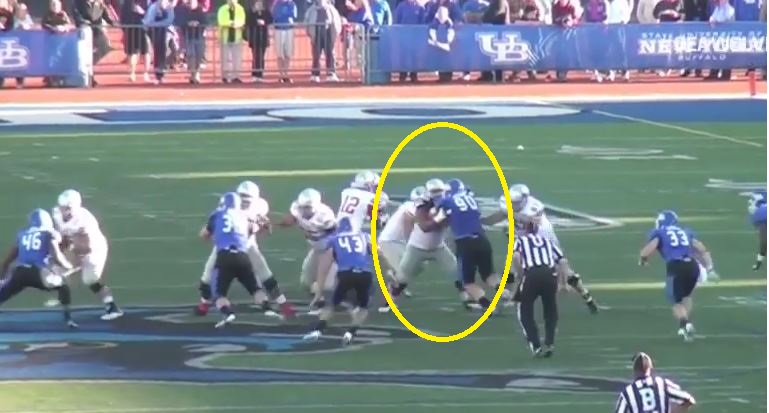 As you can see, Sokoli (#90) has his hands positioned under the guard's pads and he is beginning to drive him back while also taking up an extra block from the tackle who is pulling to assist the guard; giving Blake Bean (#33) a clear lane to the running back. In a 3-4 scheme a nose tackle that can consistently eat up 2 or more blockers on passing downs allows for the inside linebackers to shoot throught the A or B gaps with a direct line to the quarterback; the same holds true on running downs if the runner is going between the tackles, he'll run straight into the linebackers.

Here's another shot from later in the same game with Sokoli eating up multiple blocks during a goal-line situation:

In a heavy goal-line set with two tight ends and possibly a fullback in the backfield, it's important that Sokoli is able to take up 2 blockers on the line of scrimmage, which will allow for his linemates and the linebackers to engage the remaining blockers in 1-on-1 situations.

Overall, Sokoli played a key part in UB's defensive success this past season both against the run and the pass, even though he didn't put up the gaudy numbers like Khalil Mack, a good 0-technique is one of the best assets a defense can have.

Sokoli will return as the starting nose tackle this upcoming season but there will be a couple of obstacles that Sokoli will have to overcome to have a successful season:

Coming into the 2014 season Sokoli is one of the veteran leaders on the Buffalo defense and will look to lead the charge for the defensive line. The nose tackle position is under-appreciated but Sokoli has the size and strength to improve his numbers from last season.

Even with a statistical improvement in terms of tackles, and sacks, Sokoli's true impact on the field has no means of being measured. The nose tackle does the little things that can't be tracked statistically like eating up blockers so that the linebackers can do their thing and take down the quarterback, or running back. Sokoli has shown a good presence against the run game being stout at the point of attack, for a better all around performance it would be nice to see him get more penetration into the pocket on passing downs. Also, because of his height (6-5) Sokoli will need to work on not standing up and keeping his pad level low and even when taking on offensive linemen.