Buffalo's win over Miami moved the Bulls into the number two seed in the MAC. The win also assured that the worst UB will do heading into Cleveland is the number three seed and assuring a bye into at least the quarter finals.

Later in the day Toledo mounted a late comeback to upend Western Michigan. The win puts UB, WMU, and the Rockets in a three way tie at 12-4 in conference.  The first tie breaker is three way head to head which gives Toledo (2-1) and advantage over UB (1-1) and WMU (1-2). The second tie breaker is head to head between the Bulls and the Broncos. Buffalo's win at Alumni makes UB #2 and Western Michigan #3.

Ohio's loss to Kent and Akron's win over Bowling Green gives the Zips a one game lead and two home contest left.

Ohio is tied with Eastern Michigan but beat the Eagles head to head making them #5 and EMU #6.

There is another three way tie between NIU, Kent and Miami which sees the Huskies at #7, Kent at #8, and Miami at #9. Miami and Kent do have one more game versus each other.

Bowling Green fell out of that pack with their loss to Akron and find themselves in the #10 spot. Followed by CMU and Ball State who are pretty much set as the 11 and 12 teams. 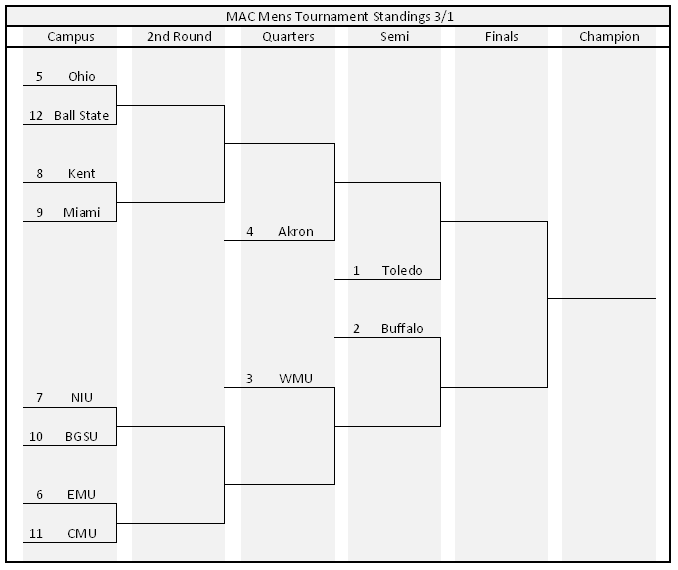 What happens for Buffalo from here?

So long as Buffalo, Toledo, and WMU are in a three way tie UB will be the number two seed. The Bulls have an away game at Akron and then a home contest against Bowling Green remaining. Toledo takes on EMU and CMU, while Western Michigan has NIU and CMU.

Buffalo does not have the tiebreaker over the Rockets, so in order to finish ahead of them they need to be a full game up. If Buffalo wins out and Toledo drops one of their two games the Bulls will win the regular season MAC title and the conference number one seed, as the Bulls will finish 14-4, Toledo 13-5, and whether WMU wins out or drops another UB will hold the tiebreaker over the Broncos based on their head to head win. In this scenario UB would be assured an NIT berth as the regular season champion should they fail to win the MAC and enter the Big Dance.

Should both UB and Toledo finish tied with WMU a game back, the order would be Toledo - UB - Western, since Toledo has the head to head advantage over Buffalo. UB cannot fall below the three seed.

Of the three teams Buffalo has the hardest schedule facing the #4 and #10 teams in the conference. Toledo faces #6 and #11 while WMU faces #7 and #11. Central Michigan can hand Buffalo the conference if the Chips get very hot in the next week of play.