Bowling Green and Ball State show that the strength of the MAC might just be in the Middle.

Share All sharing options for: MAC Baseball Semifinal Wrap Up - All hail the double elimination tournament

One thing you have to love about these two and out NCAA baseball tournaments is the story lines that can play out. For example, Bowling Green and Toledo two teams whose mutual hate matches any two teams in the NCAA had a chance to play not once, not twice, but three times. 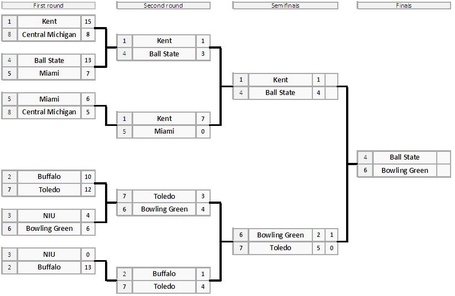 Toledo seemed to be on a Cinderella run. The seventh seeded Rockets beat Buffalo on two ninth inning runs to open the series then lost their first game to Bowling Green when the Falcons came back late in the game. Toledo proved the first win over the #2 Bulls was no fluke by dropping them 4-1 in an elimination game securing a spot in the semifinals versus, you guessed it, Bowling Green.

Toledo owned the game knocking down their rivals 5-2 to set up a do or die game for both teams. This time it was Bowling Green's Starter Cody Apthorp who set the tone. Apthrop went seven innings allowing only six hits while recording one strikeout. Apthorp’s efficiency was the strongest part of his performance, as 51 of his 76 pitches were over for strikes.

Even against the Falcon relievers Toledo was hapless becoming just the third team to get shut out in the tournament.

On the other side of the Bracket Kent State was the only top three MAC team to make it to the semi finals and they faced a rematch with the Ball State Cardinals who handled the flashes 3-0 just one day ago.

This game was almost an exact repeat. Ball State pitcher Chris Marangon went eight innings allowing just one earned run to pick up the win. In the batters box the Card's Sam Tidaback went 3-4 with an RBI.

So tomorrow it's going to be #4 Ball State, who has been on fire for weeks, against #6 Bowling Green.I